Should Eating Organ Meat Be the Next Foodie Trend?

Most people eat very little offal, if any at all. Could going the whole hog reduce the environmental footprint associated with meat consumption? It depends. 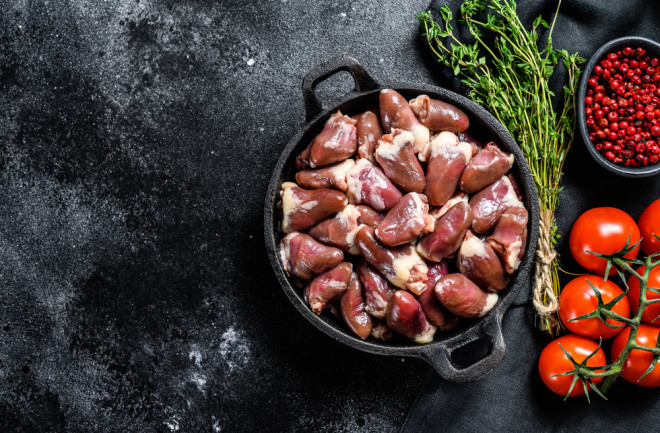 Tripe, tongue and liver might not show up on your grocery list very often, but the cuts of meat come from the same animals that provide steaks and bacon. The organ meats, often called offal, are much less common in the Western diet. But some researchers think this could be the opportunity for offal to make a comeback of sorts. As global meat consumption continues to rise, concerns about the sustainability of raising and slaughtering enough livestock to meet demand have led some scientists to question whether eating, well, more of an animal could reduce its environmental impact.

It might prove difficult to put that theory to the test, though. One significant barrier: disgust. In a recent survey of 260 Swiss residents and their attitude towards organ meat, 80 participants responded with terms of disgust, and less than 30 had positive associations with offal. Angela Bearth, a psychologist studying consumer behavior at ETH Zürich in Switzerland, and her colleagues surveyed residents to figure out what it would take for someone to look past their gut reaction and give organ meat a try. As they learned, some techniques are better than others. And even if people swallowed their preconceptions about organ meat, it remains to be seen whether that choice would actually be a boon to the environment.

It makes sense to think that boosting offal consumption in Western diets could come with environmental benefits. After all, the global appetite for protein is growing faster than population size alone would account for — both increasing wealth and urban lifestyles boost demand. Animal meat is soaring in popularity, too. By 2050, global meat consumption is predicted to increase over 2005 levels by about 44 percent. Meat production, however, emits more greenhouse gases than plant-based foods.

The need to meet global protein demands with minimal environmental impacts explains interest in insects and algae as possible solutions. Some scientists think that eating the less popular cuts of meat could help out the cause by ensuring that all resources invested in livestock are put to use, helping meet protein demand while reducing the number of animals needed to satisfy customers. A study of the German meat industry, for example, found that after eating less animal protein overall, the next most-effective way to reduce livestock-related greenhouse gas emissions is to eat more offal. The diet modification could cut emissions by as much as 14 percent, according to the research.

Unfortunately, it’s not too clear how much of a given cow, chicken or pig never makes it to market. In the U.S., meat producers export a lot of their offal to countries where local diets incorporate more of the organs. Some of the product also might go into pet food. But for the most part, getting a reliable estimate of how much organ meat gets thrown in the trash immediately after slaughter is difficult, Bearth says. “The meat industry has no interest in talking about how much they throw away.” Without quality metrics, it’s hard to know how helpful it would be to make room on our plates for tripe and liver.

Beyond that, even if consumers understand that eating offal could reduce food waste, that knowledge doesn’t necessarily lead to changes in eating habits. Berth and her colleagues found that while respondents understood the importance of sustainability, that factor didn’t make the participants more willing to incorporate offal into their diets.

Even if eating more organ meat doesn’t cut back on how much the largest slaughterhouses waste, local butchers operating on smaller scales could still be looking for more customers. In fact, that’s the case in Switzerland — a colleague of Bearth's has worked with butchers in the area to help them ensure that more of their organ meats go home with customers.

For those programs to be successful, however, organ meat might benefit from more time in high-end restaurants. Historically, organ meat featured in Swiss diets after the World Wars; it was the most affordable animal protein at the time. This could help explain why older participants in Bearth's survey were less likely to show interest in experimenting with offal. Since disappearing as a dinnertime mainstay, though, offal has indeed started to appear more in fine dining. “These days, it has turned into a culinary trend that chefs experiment with,” Bearth says. “A more urban, younger generation gets a new spin on it.”

Younger people might be more interested in organ meats in part because meals have become less utilitarian over time, Bearth says. Now, people choose their foods and diets, like vegan or paleo meal plans, to show what they prioritize and how they view themselves. “Food serves a purpose — to express your values, or show you’re into new things,” Bearth says. And what says “experimental” or "adventurous" for a Western diner better than digging into a plate of brain?

Those looking to encourage others to eat organ meat might have better luck billing the entrails as a sophisticated choice — or offering advice on how to cook it at home. Not knowing how to treat organ meats or lacking information on how long they keep in the fridge, for example, can deter customers.

If it seems like a tall order for organ meats to become part of high-society dining in Western kitchens, know that there are other, more surprising protein candidates vying for the same status. In April, news reports claimed that the EU’s European Food Safety Authority is expected to approve mealworms, locusts, crickets and grasshoppers for human consumption.