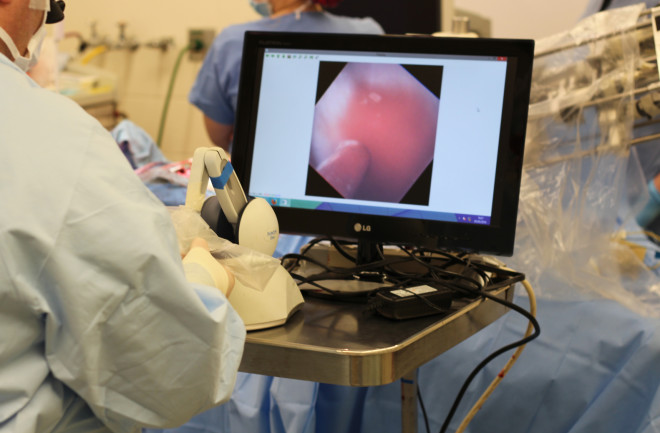 Scientist overlooking the catheter as it navigates to a pig’s heart. (Credit: Fagogenis et al., Sci. Robot. 4, eaaw1977 (2019)) When navigating through dark environments, rats swish their whiskers against nearby objects to figure out where they are. As the animals explore, they use this sense of touch to build maps of unfamiliar places. Cockroaches and blind crayfish use their antennae in a similar approach. Now, the go-by-feel strategy has inspired the creation of a robotic catheter capable of finding its way through the beating heart of lives pigs during a surgical procedure without the help of a surgeon’s guiding hand. The discovery shows using devices free of external control as part of surgery is possible, the researchers say. In all, a team of scientists completed 83 trials on a group of five live pigs. The catheter hit its intended destination 95 percent of the time and had about the same success rate as an experienced surgeon. But pulling off the invention wasn’t easy.

The tip of the catheter contains a haptic vision sensor made of a millimeter-scale camera and LED encased in silicone. (Credit: Fagogenis et al., Sci. Robot. 4, eaaw1977 (2019)) “It’s probably the hardest thing I’ve ever done,” said Pierre DuPont, a bioengineer at Boston Children’s Hospital in Massachusetts, who led the new work and has been working in medical robotics for at least a decade. “Just getting the system by itself to operate reliably inside a living being is a high bar. But on top of that we’re going to come up with these algorithms [for it] to drive around in the body by itself.”

DuPont initially thought the idea of a self-driving catheter was a bit crazy. But such devices could elevate outcomes for patients by allowing surgeons to focus on more specific aspects of a procedure. DuPont and colleagues developed the device to fix a serious condition, a leaky heart. The heart has four chambers and between them are valves that keep blood pumping in the right direction. Old age, chronic kidney disease and certain heart diseases can cause the valve between the main pumping chamber and the artery that delivers blood to the rest of the body to constrict. The condition, known in medical terms as aortic valve stenosis, can lead to chest pain, dizziness, blood clots, stroke and heart failure. Surgeons fix the issue by putting in an artificial valve in a minimally invasive procedure that does not require opening up a patient’s chest. But sometimes a gap forms between the new valve and the surrounding heart tissue, causing a leak. That’s where DuPont and his team’s robot comes in.

The engineers used machine learning to design a catheter that could find its way from the bottom tip of the heart to the leaky valve near the top. The catheter tip is about the size of a penny and equipped with an LED light and a camera. It is touch-sensitive enough to know if it’s in contact with blood, heart tissue or valve. It also knows how hard it’s pressing. The researchers combined this touch sense with imaging from the catheter’s camera to create a device with “touch vision.” Like rats' whiskers and crayfish antennae, the catheter navigated inside the heart by repeatedly making contact with the tissue and following the walls of the heart to its destination. Since the device knows how hard it's pressing, it didn't hurt the heart tissue when it was bumping against it. Once in place, surgeons deployed a plug to stop the leak. The robotic catheter’s navigation took about the same amount of time as a surgeon guiding the catheter, the researchers report in the journal Science Robotics. The work proves autonomous catheters are technologically feasible, DuPont says, and the innovation could benefit surgical performance by freeing surgeons to focus their energy on the critical steps, such as deploying the plug for the leaky heart, rather than devoting some energy to navigation and some to placing the plug. The biggest benefit however might be that the artificial intelligence behind autonomous medical devices never stops learning, according to DuPont. He envisions a future where the programs behind the devices constantly learn from all the other devices out there. In this future, “suddenly every clinician in partnership with one of these robots can have their expertise raised to the level of the most experienced person,” he said.