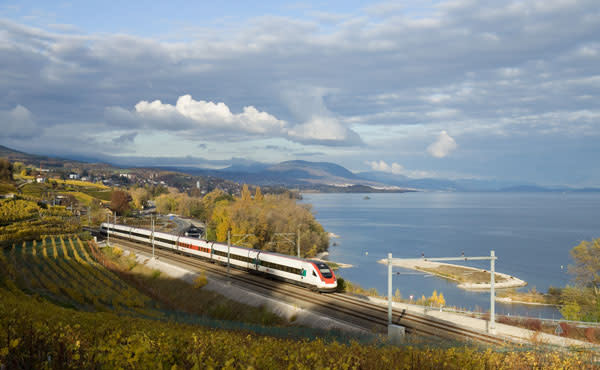 If you're turning green, it's not the scenery's fault.

As you may or may not know, Switzerland, land of chocolate, cheese, and cuckoo clocks, is also the land of trains. More than 1,800 miles of track crisscross the quaint alpine utopia, carrying 347 million passengers per year and maintaining the punctuality of a Stepford wife

. That's some serious trainage. Some of those trains, unfortunately, are making people trainsick. And the Schweizerische Bundesbahnen

, the Swiss train authorities, just wouldn't stand for that. They asked some scientists to get to the bottom of it

. The problem trains are a class of vehicles that tilt by 8 degrees as they go around curves, preserving their speed by compensating for centripetal force. Something about those tilts was putting passengers off-kilter, so a team of Swiss and American neurologists attached accelerometers and gyroscopes to a test train and to the heads of passengers, whom, one hopes, were compensated for consenting to their unusual headgear. 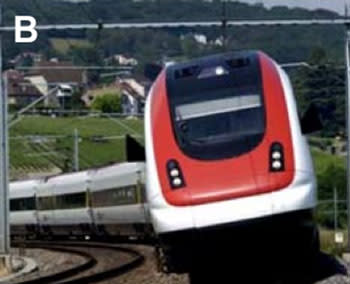 A tilting train in action.

Usually, the tilt starts with the first train car that hits the curve, then propagates through the later cars. It's also rather slow, so passengers' heads get tipped to the side sometime after the tilt is initiated. If the train sensed the tilt coming and tilted all the cars quickly, the team thought, the tipping of passengers' heads would be synchronized with the train's movement, avoiding the inner ear confusion that leads to motion sickness. Sure enough, when they equipped the train with a GPS system that let it recognize its location and execute a swift tilt just before going around the curve, the be-gyroscoped passengers reported no motion sickness

. And the Swiss train authorities, thank you very much, will be investing in this GPS technology for their next generation of rolling stock. Less vomit, more cheese, everyone's happy. Meanwhile, in the United States, trains continue to arrive four hours late

for hours at a time

, and catch on fire