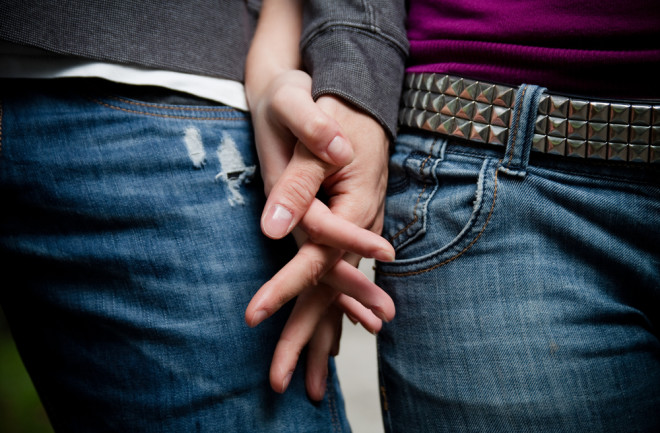 (Credit: Peter Bernik/Shutterstock) In a new study, a team of scientists from the United Kingdom, Iceland and the United States claims to have isolated a set of 38 genes that they say play a role in determining the age at which people lose their virginities. The study builds on previous research that established a link between genetics and loss of virginity. This most recent study highlights the link between genetic factors influencing the onset of puberty and losing your virginity, as well as genes responsible for personality traits, such as risk-taking, which were also found to be correlated with the age at which people first had sex.

Many Factors At Play

The researchers drew from the UK Biobank survey, a large database containing genetic information from thousands of men and women in the UK. In all, they looked at genes from over 125,000 people between the ages of 40 and 69 to perform a Genome-Wide Association Study (GWAS). This gave them a broad overview of how common differences in the genome correlate with various behaviors — in this case, how old people were when they first had sexual intercourse. They not only identified the genes that were related, but they were able find connections between a host of other traits and having sex for the first time, illustrating the fact that sexual activity is just one of many interrelated behaviors that might be impacted by genetic and environmental factors. The researchers believe their findings shed some light on the ways our upbringing influences the rest of our lives. They published their findings Monday in the journal Nature Genetics.

Going through puberty earlier and having sex at a younger age was one of the strongest associations they found. The average age of puberty has dropped steadily in past decades, from around 18 in the 19th century to about 12 today. The researchers noted a commensurate drop in the age at which people first have sex over the years, from about 21 in the 1960s to around 18 in the late 1980s. While puberty is encoded in our genes, there has been some evidence in recent years that environmental factors such as obesity and exposure to chemicals may also be to blame. There is also evidence that going through puberty earlier can have negative outcomes later in life. Genes known to influence risk-taking and stimulus-seeking were also found to reduce the age at which people became sexually active. Higher intelligence, on the other hand, was associated with losing your virginity later in life. In all, the 38 genes identified by the study offer a look at how the genes underlying both physiological and psychological factors play into our sexual behavior as adolescents.

Placing all of the blame on our genes for determining when we lose our virginities ignores a whole host of factors entirely out of our control, says Alicia Smith, an associate professor in the department of Psychiatry and Behavioral Sciences at Emory University. "Certainly, the age at which a person first has sex is based on a lot more than the age at which they are first biologically capable," she says. "It is also based on cultural and socioeconomic factors that are very difficult to account for in genetic studies." Cultural and socioeconomic factors might be responsible for the negative outcomes correlated with the age of virginity loss in the study. While attempting to isolate the genes that help us to mate is a tantalizing prospect, this study says more about the correlations between earlier sexual activity and its consequences later in life. Those who lost their virginities younger were more likely to have more sex partners, a higher BMI and fewer years of education than those who waited until later in life to begin having sex. Of course, having sex does not make a person less intelligent, or increase their BMI — what's at play here is something deeper, likely tied to the very factors that push people to have sex at younger ages. In the end, losing your virginity is a personal experience, not a fixed point that your genes shepherd you toward. "Among 40-69 year old adults in the United Kingdom that report their age at first sexual intercourse between 18 and 21 years, the study estimates that genetic factors can account for 1 year, but environmental factors account for the other 3 years," says Smith. Just as our genes vary, so does our environment, meaning that any one person's experience is difficult to predict with a wide-ranging study such as this one.