Did you find the above "Mr. Bean" clip funny, or just inappropriate? Depending on your answer, we can probably guess your age. That's because, according to this study, there is a clear association between age and the ability to laugh at socially inappropriate humor. The researchers demonstrated this by showing people of various ages humorous video clips featuring either socially appropriate or inappropriate scenarios. Throughout the video sessions, the participants wore electronic sensors that could detect smiling, giving the scientists a quantitative measure of their subjects' spontaneous reactions. The result? The older the subject, the less they laughed at the inappropriate clips. The study's list of sitcom scenes is pretty good (see below), and includes the clip shown above, which was determined to be the most inappropriate of the bunch. Age-related differences in judgments of inappropriate behavior are related to humor style preferences. "Identifying social gaffes is important for maintaining relationships. Older adults are less able than young to discriminate between socially appropriate and inappropriate behavior in video clips. One open question is how these social appropriateness ratings relate to potential age differences in the perception of what is actually funny or not. In the present study, young, middle-aged, and older adults were equally able to discriminate between appropriate and inappropriate social behavior in a diverse set of clips relevant across age groups. However, young and middle-aged adults rated the gaffe clips as funnier than control clips and young adults smiled more during the inappropriate clips than the control clips. Older adults did not show this pattern, suggesting that they did not find the inappropriate clips funny. Additionally, young adults endorsed a more aggressive humor style than middle-aged and older adults and aggressive humor style endorsement mediated age differences in social appropriateness ratings. Results are discussed in terms of possible mechanisms such as cohort differences in humor and developmental prioritization of certain humor styles, as well as the importance of investigating age differences in both abilities and preferences." Bonus table: descriptions of clips used: 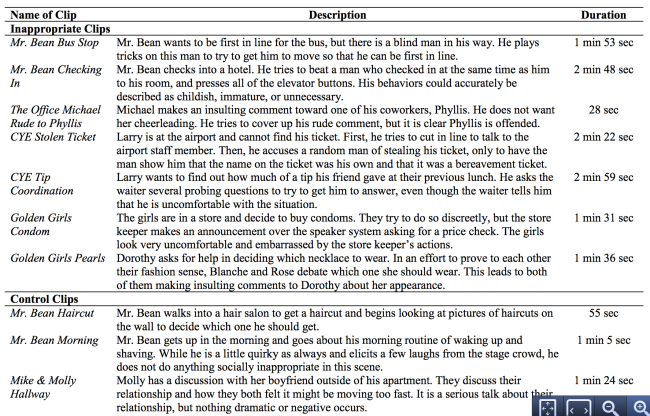