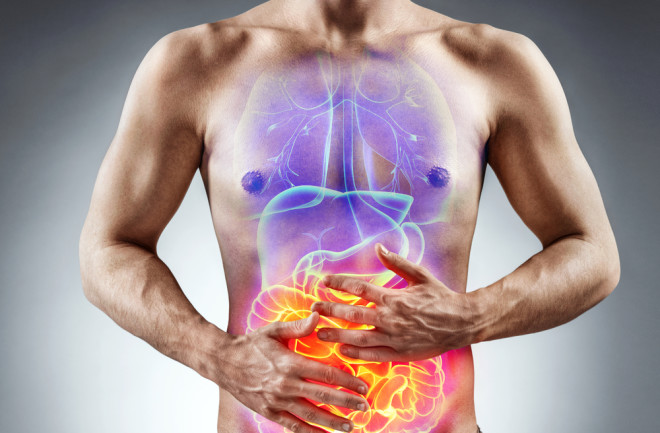 Irritable bowel Disease is a painful syndrome that affects the intestines. Scientists say they've discovered a major driver of the disease. (Credit: RomarioIen/shutterstock)

Researchers have identified a prime culprit behind inflammatory bowel disease, or IBD, an incurable disorder that causes abdominal pain, diarrhea and weight loss from malnutrition. The discovery also reveals a pathway to treatment, scientists report today in the journal Cell Reports.

At least three million people across the U.S. suffer from Crohn’s disease or ulcerative colitis, the two main types of inflammatory bowel disease. The disorders affect the digestive tract and lining of the gut, where inflammation causes cramps, constipation and rectal bleeding. Fever, fatigue and appetite loss often accompany the conditions. Although there is no cure, scientists think genetics, the gut microbiome and the immune system may all play a role. But a clear cause eluded them until Ronai and his team landed on a suspect while examining an unrelated phenomenon.

Ronai’s lab studies the processes cells use to bounce back from stress. Since a gene called RNF5 is a key player in these activities, the scientists suspected that disrupting its function in mice would reveal major new insights. So, a decade ago, the team created mice that lack RNF5.

“To our great surprise, these mice did not appear to have any significant [traits],” said Ronai. “We even called them ‘the boring mice’.”

But the researchers did notice that the intestines of these mice were inflamed — not enough to cause big problems, but enough to keep an eye on. That baseline inflammation led the scientists to ask what would happen if they triggered more inflammation in the animals’ guts, similar to how dairy or fried and spicy foods can elicit inflammatory bouts in people with IBD.

So, the researchers added a compound that causes gut inflammation in mice called DSS to the rodents’ drinking water. The drug usually causes mild intestinal inflammation in healthy mice and they recover within a couple of weeks. But the mice without RNF5 responded much more severely. They developed acute colitis with all the symptoms people have. Close to 50 percent of the animals died within a few weeks.

“These animals are super sensitive to inflammation,” Ronai said.

RNF5’s usual job is to flag cellular garbage for disposal. When the researchers went looking for proteins in intestinal cells RNF5 might mark as trash, they found one called S100A8, an FDA-approved marker for measuring severe colitis. The mice without RNF5 not only had high amounts of S100A8 in their intestinal cells, but also in their blood.

And then when Ronai and team gave the mice antibodies that neutralize S100A8, the rodents’ IBD symptoms disappeared.

What’s more is that the ratio of low RNF5 and elevated S100A8 levels in mice matched that in human patients with IBD ,meaning doctors could use the protein levels as a blood test to identify patients for whom the treatment would work best.

The results “provide the justification and rationale to develop drugs against S100A8 that go to the clinic,” Ronai said.