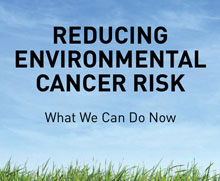 Yesterday, a government entity called the President's Cancer Panel released an alarming report declaring that environmental toxins are causing "grievous harm" to Americans. The authors of the report (pdf) went on to say that while much more research needs to be done to determine the long-term effects of exposure, they believe that the "true burden of environmentally induced cancer has been grossly underestimated."

But no sooner had they released the report than other cancer experts came forward to say that it wasn't alarming, but rather alarmist.

First, the panel's findings. In the 240-page report, the advisory panel noted that Americans are exposed to chemicals whose safety hasn't yet been definitively established--like the chemical BPA that's found in some everyday plastics, pesticides, and the substances found in industrial pollution. They write:

"With nearly 80,000 chemicals on the market in the United States, many of which are used by millions of Americans in their daily lives and are un- or understudied and largely unregulated, exposure to potential environmental carcinogens is widespread" [TIME].

The authors go on to suggest a more precautionary approach to approving new chemicals, and argue that under the current regulatory system the government doesn't act until there's some proof of harm. They write that cancers could be prevented if the government required more proof of safety from companies before approving a new chemical.

But the report's release brought an immediate rebuttal from an authoritative source: the American Cancer Society.

Dr. Michael Thun, an epidemiologist from the cancer society, said in an online statement that the report was “unbalanced by its implication that pollution is the major cause of cancer,” and had presented an unproven theory — that environmentally caused cases are grossly underestimated — as if it were a fact. The cancer society estimates that about 6 percent of all cancers in the United States — 34,000 cases a year — are related to environmental causes (4 percent from occupational exposures, 2 percent from the community or other settings) [The New York Times].

Thun went on to say that the report does a disservice to the public by suggesting that the risk of environmentally caused cancer is much higher than 6 percent, thus diverting attention from the real top cancer causes, like smoking and obesity.

The report's authors maintain that their findings were balanced and judicious, so the spat doesn't seem likely to end anytime soon. But the opponents do all agree on one thing: More research on the effects of exposure to everyday chemicals would be tremendously useful.

DISCOVER: The Dirty Truth About Plastic