Scientist finally figures out why holes feel larger with your tongue than with your finger. 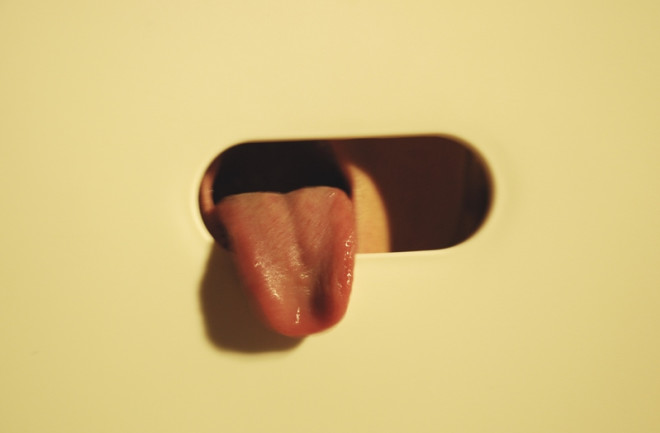 For almost 30 years, scientists have known about the illusion that makes small holes seem larger when felt with the tongue rather than with the fingers (we don't know who first discovered this, but we assume it was X-rated). Since that time, the reason for this illusion remained mysterious... until now! This scientist used a series of experiments involving, tongues, fingers, and even toes to explore the phenomenon. He found that it's the "pliability" of the appendage used to probe the hole in question that determines how big the hole seems: the highly pliable tongue is more accurate and perceives larger sizes than the less pliable finger or toe. That is definitely not a double entendre!

The Extent of Skin Bending Rather Than Action Possibilities Explains Why Holes Feel Larger With the Tongue Than With the Finger. "When small holes are felt with the tongue, they are perceived to be larger compared with when felt with the index finger. This oral illusion has not yet been consistently explained. From present action-specific accounts of perception, we derived a high-level sticking-action hypothesis to explain the oral illusion. In 5 experiments, we contrasted this hypothesis' predictions with predictions from the low-level bending hypothesis, which states that felt hole size decreases with decreasing bending of the skin at the hole's edges. Results from Experiments 1 to 3 showed that felt hole size decreases with the pliability of the exploring effector (tongue > index finger > big toe, big fingers > small fingers), which affects skin bending, and that size perception with the highly pliable tongue is more accurate than with the less pliable finger and toe. Experiment 4 showed that holes of intermediate size are perceived to be larger with the tongue's tip than with its dorsum. Finally, exploration styles that lessen the skin's bending (using low vs. high tongue forces in Experiment 5) decreased perceived hole size. Overall, the results favor the low-level bending hypothesis over the high-level sticking-action hypothesis." Related content: Why do snakes flick their tongues? (Hint: it’s not just about smelling).The optical illusion that could make your dentist drill more than necessary.This optical illusion will blow your mind!