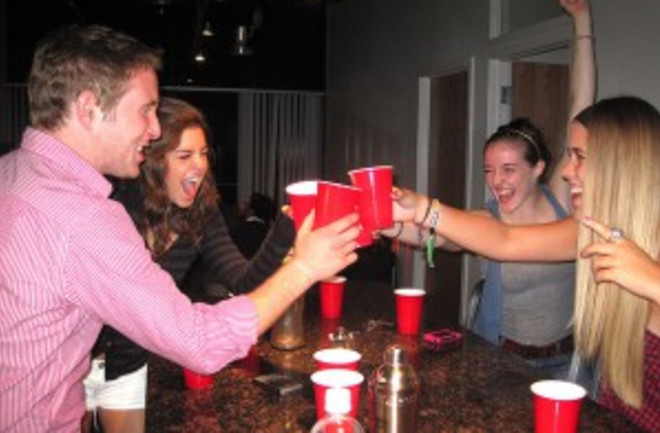 Photo: flickr/Courtney MurphyIt's known that men are much more likely to binge drink and to develop alcoholism than women. Researchers have long hypothesized that this difference may be due to men getting more of a "reward" from drinking compared to women. In this study, the authors tested this hypothesis in a social context. They had groups of participants drink either alcoholic, placebo, or control drinks: "The alcoholic beverage was 1 part 100-proof vodka and 3.5 parts Ocean Spray Cranberry Juice Cocktail. In the placebo group, the glass was smeared with vodka, and a few drops of vodka were 'floated' on the top of the beverage to increase credibility." They then recorded the social interactions between participants, in particular smiling as a readout for the fun being had. The researchers found that men given alcohol experienced a more significant increase in "contagious" Duchenne smiling -- a genuine smile in response to someone else's smile -- compared with women.This doesn't explain why men are smiling more when drunk, but does imply more fun is being had.Alcohol and Emotional Contagion: An Examination of the Spreading of Smiles in Male and Female Drinking Groups "Researchers have hypothesized that men gain greater reward from alcohol than do women. However, alcohol-administration studies in which participants were tested when they were drinking alone have offered weak support for this hypothesis. Research has suggested that social processes may be implicated in gender differences in drinking patterns. We examined the impact of gender and alcohol on “emotional contagion”—a social mechanism central to bonding and cohesion. Social drinkers (360 male, 360 female) consumed alcohol, placebo, or control beverages in groups of three. Social interactions were videotaped, and both Duchenne and non-Duchenne smiling were continuously coded using the Facial Action Coding System. Results revealed that Duchenne smiling (but not non-Duchenne smiling) contagion correlated with self-reported reward and typical drinking patterns. Importantly, Duchenne smiles were significantly less “infectious” among sober male groups versus female groups and that alcohol eliminated these gender differences in smiling contagion. Findings identify new directions for research that explores social-reward processes in the etiology of alcohol problems." Related content: The scientifically-proven method for getting your bartender’s attention.Flashback Friday: A scientific explanation for beer goggles!Behold the nerdiest cocktail party ever!