Save the Planet: Dissolve Your Dead 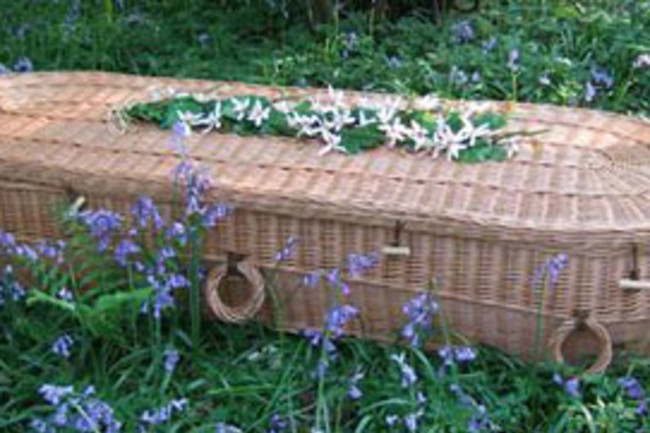 You eschew cars and planes, eat insects instead of meat, dedicate yourself to recycling, avoid plastic, and install CFLs in every socket within reach—but what about your carbon footprint after death? Standard coffin burials are known environmental hazards, involving high levels of hazardous chemicals and metals at every step. The body is first embalmed with formaldehyde (arsenic and mercury, thankfully, are no longer used), then placed in either a wood coffin (covered in varnishes, sealers, and preservatives) or a metal coffin (full of lead, zinc, copper, and steel). In America, the casket is then placed inside a concrete liner before burial in the ground—using enough reinforced concrete every year to construct a two-lane highway from New York to Detroit. Cremation doesn't take up nearly as much space, but is no better (and possibly worse) for the environment. Burning bodies emit nitrogen oxide, carbon monoxide, sulfur dioxide, particular matter, mercury (from silver dental fillings), hydrogen fluoride, hydrogen chloride, and other heavy metals. But there are ways to dispose of bodies that are environmentally friendly (besides tossing them into the ocean with rocks tied around their ankles). In recent years, the "deathcare" industry has been making efforts to be greener—e.g., using the heat generated by cremations to keep mourners warm during funerals, stockpiling the deceased to burn them en masse, solar crematoriums, and burying unembalmed bodies in biodegradable coffins (as people have been buried for thousands of years). A new option has now arrived—dissolving bodies in lye-filled pressure cookers and flushing the syrupy, coffee-colored remains down the drain. (And you thought toilet to tap was foul). The euphemistic "water resolution" applies alkaline hydrolysis—the chemical process in which a molecule is cleaved in the presence of a basic liquid solution—to the cadaver for three hours, producing a viscous solution of amino acids, peptides, sugars, and fats, along with "bone shadows" (ash), which can be given to the relatives for burial (similar to cremation). It is similar to the natural process of decomposition, accelerated by high pressure and temperature, and alkalinity. The reduction of a deceased loved one to a motor oil-like syrup and a handful of white powder doesn't seem very dignified, but neither does sucking out their blood and replacing it with formaldehyde (which can cause spasms and ghastly muscle rigidity). It's a sensitive issue, but slowing the decomposition of a dead body seems pointless and utterly futile—what's the sense in preserving the dead if the process endangers the living? Image: Ecoffins