Saami not descended from Swedish Hunter-Gathers

The driving force behind the transition from a foraging to a farming lifestyle in prehistoric Europe (Neolithization) has been debated for more than a century...Of particular interest is whether population replacement or cultural exchange was responsible...Scandinavia holds a unique place in this debate, for it maintained one of the last major hunter-gatherer complexes in Neolithic Europe, the Pitted Ware culture...Intriguingly, these late hunter-gatherers existed in parallel to early farmers for more than a millennium before they vanished some 4,000 years ago...The prolonged coexistence of the two cultures in Scandinavia has been cited as an argument against population replacement between the Mesolithic and the present...Through analysis of DNA extracted from ancient Scandinavian human remains, we show that people of the Pitted Ware culture were not the direct ancestors of modern Scandinavians (including the Saami people of northern Scandinavia) but are more closely related to contemporary populations of the eastern Baltic region. Our findings support hypotheses arising from archaeological analyses that propose a Neolithic or post-Neolithic population replacement in Scandinavia...Furthermore, our data are consistent with the view that the eastern Baltic represents a genetic refugia for some of the European hunter-gatherer populations.

The Saami are of interest because of their cultural and genetic uniqueness. They, and to a lesser extent Finns, have very high frequencies of mtDNA haplogroup U5, which is generally associated with the first modern human settlers of Europe. This haplogroup has been found in the papers which looked at hunter-gatherer populations in other regions of Europe. Additionally, the present expanse of the Saami is sharply contracted from heir range even 500 years ago, they were marginalized, assimilated and exterminated as Norwegians, Swedes and Finns spread north in the early modern period. But it turns out that particular lineages of found in these samples, in particular the 19 which were Pitted War Culture (PWC) are more common among the Latvians and Lithuanians. This table from the paper shows all the individuals and the frequencies in various nations. The gray are the 3 individuals from the Funnel Beaker Cultural/Trichterbecher Kultur (TRB): 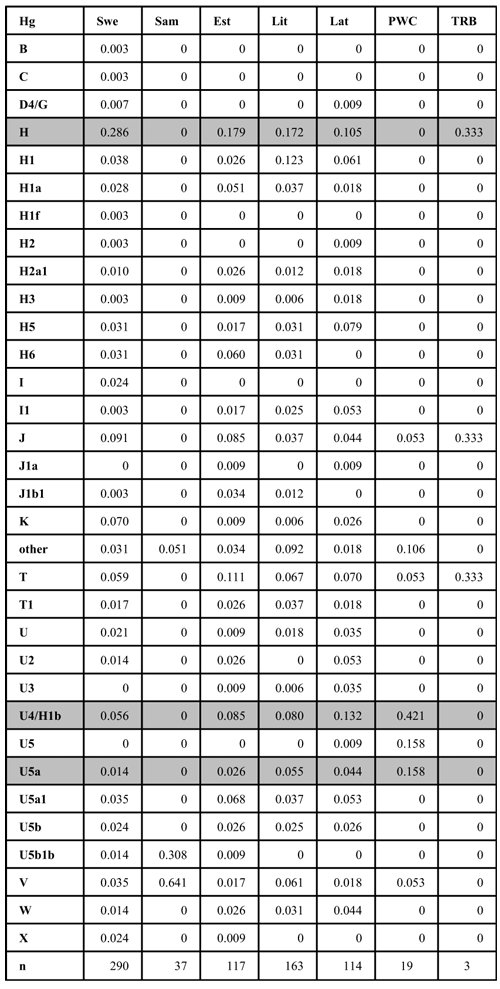 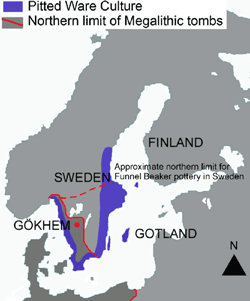 The issue here is that for 1,000 years, between 3000 and 2000 BCE, the hunter-gatherer culture and the farmers "co-existed." Scandinavian is relatively marginal for many crops which were optimized for the Middle East and Mediterranean, so it is likely that hunter-gatherers in northern Europe had long experience (or at least vague knowledge) of sedentary populations over the horizon. One of the likely issues with the irruption of relatively dense living farmers among hunter-gatherers is that the historical record suggests decimation from disease, ecological marginalization, and finally outright genocide, among the latter due to the former. But if the lands which the hunter-gatherers inhabit are ecological inhospitable to farming then it is possible that the natural limit on the spread of agriculture will give the hunter-gatherers "demographic breathing" room and time to develop immunities. It seems that this sort of thing occurred in much of Scandinavia before the coalescence of a mixed-agricultural system which combined cereal production and cattle culture. By the time the farmers expanded north the hunter-gatherers likely had some coping mechanisms biologically (immunity) and culturally (diffusion can occur, and knowledge of what happened to the south would encourage caution). I am intrigued by an "East Baltic refugia," because this is a case where perhaps the old-line physical anthropologists were correct, as they did posit and East Baltic race. Look at this PC chart:

Southern Italy and Latvia are at two ends of the distribution. In the context of these populations the southern Italians should be the most Neolithic, that is, derived from the pulse coming out of the Middle East. It is peculiar that Lithuania and Latvia are so distal, especially in relation to Russia. Historically Latvia and Lithuania have always been relatively "late to the game," they were the last regions to accept Christianity within Europe excepting the Saami. In some whats genetically they resemble Finno-Ugric peoples and not other Indo-European speakers (e.g., high frequencies of TAT). If there are candidates for populations who are the "original Europeans," I think it is reasonable to add the Baltic peoples to the Saami and Basque in the list of top contenders. There are some issues: 1) They needed bigger sample sizes for the TRB. 2) Bigger sample sizes would be nice, period, in this case. 3) mtDNA tells you only show much. It is the maternal lineage, so perhaps the paternal lineage exhibits more continuity? (I'm skeptical, but it would be nice to know) 4) The PWC samples were from an island. Islands are often genetically strange because of their isolation. A mainland site would be less concerning. 5) In general, there are lots of weird discontinuities in mtDNA from what I can tell. We might want to be careful as to the reliability of this locus in giving us a fine-grained snapshot of population history. Bryan Sykes might want to reconsider The Seven Daughters of Eve. Looks like Lilith's seed might have won out.... Citation Malmstro¨m et al., Ancient DNA Reveals Lack of Continuity between Neolithic Hunter-Gatherers and Contemporary Scandinavians, Current Biology (2009), doi:10.1016/j.cub.2009.09.017 H/T Dienekes