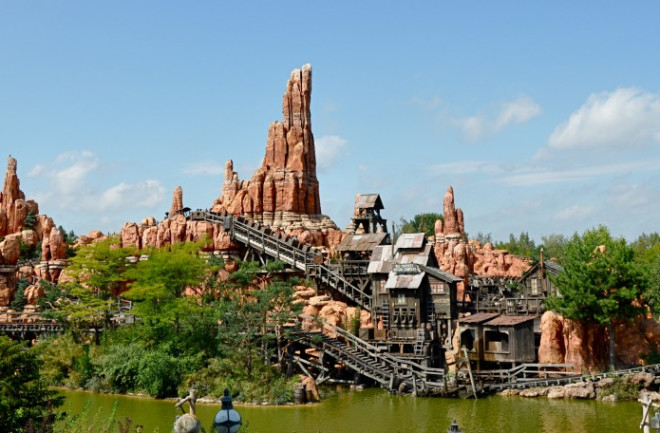 The Big Thunder Mountain Railway at Disney World. (Credit: Gian94g/Wikimedia Commons) For those suffering from painful kidney stones, there's a really good excuse to visit Disney World. A new study suggests that riding roller coasters can shake kidney stones loose before they become a problem that requires medical attention. For years, urologists have heard from patients that bouncing, jostling and jarring activities seem to help them pass kidney stones, but there hasn't been research to back those claims up. It took an astonishing claim from one patient who returned from Disney World to spur two enterprising urologists, armed with a 3-D printed kidney, into action.

"Imagine giving birth to a porcupine," says David Wartinger, professor emeritus at the Michigan State University College of Osteopathic Medicine, describing what it's like to pass a kidney stone. Kidney stones form when minerals, usually calcium, accrete in the kidneys and begin to form jagged lumps. These stones will eventually move from the kidney down into the bladder and eventually out through the urethra. Stones smaller than 4 millimeters can usually pass with relative ease, but anything larger can get stuck, often requiring a visit to the emergency room. It is estimated that around 1 in 11 people around the world will suffer a kidney stone at some point.

The patient spotlighted in the study, which was published Monday in the Journal of the American Osteopathic Association, passed not one but three stones during the trip, all thanks to a single ride — the Big Thunder Mountain Railroad coaster. There's around a one percent chance of passing a kidney stone larger than six millimeters naturally, the researchers say in their paper, so batting 1.000 on this ride couldn't have been a coincidence. The lucky patient's claims corroborated with other stories that Wartinger, a co-author of the paper, had heard over the years. Sufficiently convinced, he decided to test out the therapeutic coaster for himself. Along with a former student, he traveled to Disney World with a 3-D printed model of a kidney in tow — based on scans of the patient who passed three stones on Big Thunder Mountain. Wartinger filled it with urine and actual kidney stones to best mimic real-world conditions. With the model in a backpack, he rode the coaster 20 times, checking the replica kidney after each ride to see if any of the stones had moved. They did.

A silicon cast of the inside of a kidney in the office of Dave Wartinger. (Credit: G.L. Kohuth/Michigan State University) Wartinger found that sitting in the front of the ride resulted in passing a kidney stone roughly 17 percent of the time, while sitting in the last car yielded a whopping 64 percent success rate. This disparity held no matter the stone size or where in the kidney it was placed. Wartinger thinks that sitting in the back on this particular ride helped because the last car ended up going faster down the inclines and around turns. Ultimately, it was likely the combination of vibrations and sharp turns that jostled the kidney stones loose from the labyrinthine passageways of the kidney, he says.

While Big Thunder Mountain may have hit the sweet spot for one patient, Wartinger says that the correct combination of twists, turns and bumps will differ for each person. The inner structure of a kidney looks like a vast river delta with a series of branches all leading into a main chamber, and these branches look different for everyone. "The collecting system for every human being is almost as distinct as their fingerprint," he says. "So I suspect that there are roller coasters that are more advantageous for one person versus another." In addition to roller coasters, Wartinger has heard anecdotal evidence that bungee jumping, snowmobiling and dirt biking have helped pass kidney stones — anything that involves jarring motions that could tease a stone from its resting place in the branches of the kidney.

Most Exciting Medical Treatment Ever

Wartinger says that he has strapped in for roughly 230 rides with his fake kidney so far, and he hopes to expand his research to other theme parks. His research actually began back in 2008, but he has experienced difficulty securing funding and support for his study. Quirky as it may be, he says that his research could provide a fundamental solution to a common problem. "They try to get us from day one in medical school to get us to think in terms of preventing disease and reducing health care costs and this really addresses both," says Wartinger. "If we can apply this to patients we can save a tremendous amount of money for the healthcare system, but the reduction in terms of human suffering is dramatic." Wartinger says that he would recommend a roller coaster ride to any of his patients "without hesitation," as long as they feel comfortable with the experience, of course.