WARNING: The conclusions in this paper have been criticised in recent years and many groups have failed to replicate the findings. There is also evidence that XMRV is a recent creation of lab experiments. The journal Science has since asked the authors to retract the paper.

Chronic fatigue syndrome (CFS) is a disease that afflicts people with extreme and debilitating tiredness that lasts for many years and isn't relieved by rest. Some estimates suggest that it affects up to 1% of the world's population. We don't know what causes it. Prostate cancer is one of the most common cancers in the world and kills around 221,000 people every year. Its causes too are largely unknown. What do these two diseases have in common? They have both been recently linked to a virus called XMRV (or xenotropic MulV-related virus in full). 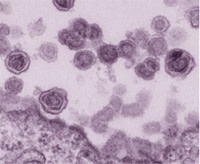 This doesn't mean that you can 'catch' either prostate cancer or CFS. We don't even know if XMRV actually causes either disease - it could just be that people with weakened immune systems (such as cancer patients or those with CFS) are more easily infected by the virus. For the moment, it's a fascinating link but one that raises more questions than it answers.

XMRV was first discovered in prostate cancer patients in 2006, and a recent study found XMRV genes in 6% of prostate cancers compared to just 2% of healthy prostates. The virus's proteins were more starkly linked to cancerous prostates and overall, these tissues were 5 times more likely to carry the virus than their healthy counterparts. Now Vincent Lombardi and Francis Ruscetti have discovered that the XMRV is also over 50 times more common in CFS patients than in the general healthy population.

The idea of a virus as the culprit behind chronic fatigue syndrome isn't far-fetched. People who have the condition have abnormal immune systems that seem to be permanently activated, but that lack the normal complement of defensive "natural killer cells". They're also more likely to have faulty version of an antiviral protein called RNaseL. just as infected prostate cancer patients are. Spurred on by these results, Lombardi and Ruscetti showed that the virus is a common hitchhiker in the blood of CFS patients. Around two-thirds of these samples contain XMRV's gag gene and carry traces of the virus's proteins. In healthy people, the virus is a much rarer visitor - its genes only showed up in 4% of such samples, and its proteins never did. These stark differences mean that people with chronic fatigue syndrome are 54 times more likely to be infected with XMRV than your average person on the street. The detection of the same virus in two such different diseases - prostate cancer and CFS - seems very strange, but for the moment, it's clear that we're dealing with the same virus. The genetic material taken from the CFS sufferers were 99% identical to strains found in prostate cancer patients, and distinct from MLV, a related virus that infects mice. That certainly rules out the possibility that the tests are just picking up MLV, a common contaminant of cancer cells in labs.

The virus can even pass from one tissue from another - infected blood cells from CFS patients can transmit the virus to uninfected prostate cancer cells if the two are mixed together. Lombardi and Ruscetti even managed to photograph the viruses under an electron microscope, as they travelled from one cell to another.This research is just the beginning. Above all else, we need to establish if XMRV cause disease or if it simply exploits sick cells? Is XMRV in the driving seat or is it just along for the ride? Perhaps these two conditions simply make it easier to pick up the virus? The answer to these questions are worth finding out, especially since 3.7% of the healthy people in this study tested positive for XMRV. If that's reflective of the general population, it means that millions of people could be infected with a virus with undetermined links to major diseases.Reference: Science 10.1126/science.1179052 More on viruses: