Retinal Implants Get an Upgrade 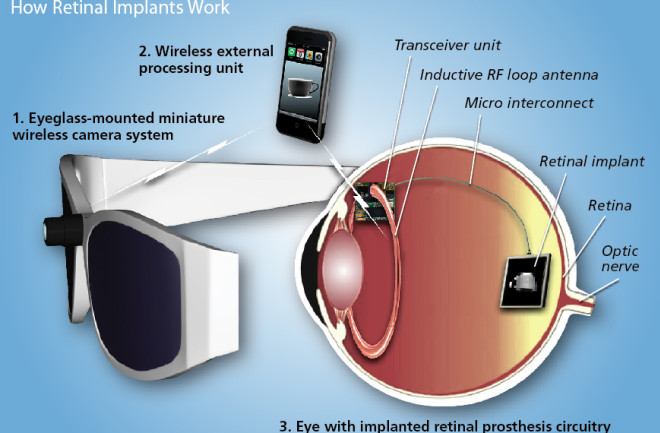 Bionic eyes seem the stuff of science fiction. But not only are they real, they keep improving: A new technique has the potential to help patients with retinal implants see better, indoors and out.

People who have lost their vision due to a degenerative eye condition can have it partially restored with this technology. Retinal implants, chips of electrodes inserted in the retina, work by electrically stimulating a patient’s remaining retinal cells directly, rather than letting light waves do it.

An external camera mounted within glasses captures an image and feeds it to a simple microprocessor — typically worn somewhere on the body, like a belt — which then wirelessly transmits a set of instructions to the electrodes in an implant. Those electrodes then re-create the image in grainy black and white within the eye’s retinal cells. Presto, electronic eyesight. Relying on them indoors, where one can make out vague shapes with stark contrast, is one thing. Step outside, though, and it throws implants into a frenzy.

The uniformly bright background stimulates most of the electrodes on the retinal implant, says physicist Wolfgang Fink of the University of Arizona. Each electrode produces a hemispherical electric field that clashes with its neighboring electrode’s signal, since electric fields cannot cross. “It’s a rule most implant efforts seem to ignore,” says Fink. Fink and physicist Erich Schmid, of the University of Tübingen in Germany, say the answer lies in the way the electrodes are stimulated. They developed a computational model that organizes the electric fields — the difference between a geyser and the fountains of Bellagio — to work with this oft-overlooked rule.

Their model programs a kind of choreography for the electrodes in an implant, a process they call shaping the electric field. Groups of neighboring, but not adjacent, electrodes would quickly fire in succession to prevent warring electric fields. Doing this would result in better resolution, perhaps even enough to recognize faces.

Fink’s technique doesn’t require new hardware, so patients wouldn’t face new surgeries. “It’s like downloading a new driver for a printer,” says Fink. “You still have the same printer, but all of a sudden, you have new capabilities.”

Patients would simply download an update onto the external device already connected to their implants, giving their microprocessors new instructions on how to stimulate the electrodes.

It might be a while before today’s patients see the benefits, but good sci-fi technology is always worth the wait. “Sometimes you have to swim upstream to get a new breakthrough,” Fink says.

[This article originally appeared in print as "I Can See Clearly Now."]