Researchers' Quest for an Artificial Heart 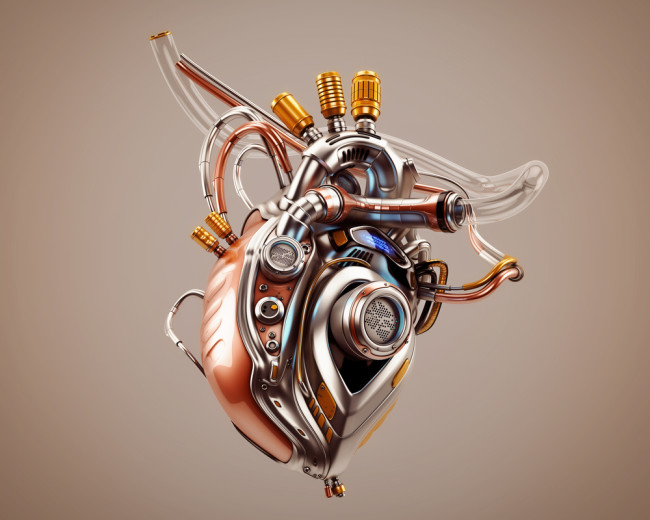 The need to mend broken hearts has never been greater. In the USA alone, around 610,000 people die of heart disease each year. A significant number of those deaths could potentially have been prevented with a heart transplant but, unfortunately, there are simply too few hearts available. In 1967 the South African surgeon Christiaan Barnard performed the world’s first human heart transplant in Cape Town. It seemed like a starting gun had gone off; soon doctors all around the world were transplanting hearts. The problem was that every single recipient died within a year of the operation. The patients’ immune systems were rejecting the foreign tissue. To overcome this, patients were given drugs to suppress their immune system. But, in a way, these early immunosuppressants were too effective: they weakened the immune system so much that the patients would eventually die of an infection. It seemed like medicine was back to square one.

One solution that researchers have pursued since the late 1960s is an artificial heart. Perhaps the most influential device was kick-started by Willem Kolff, the physician-inventor who produced the first kidney dialysis machine. Kolff invited a fellow medical engineer, one Robert Jarvik, to work with him at the University of Utah, and the result was the Jarvik-7. Made up of two pumps, two air hoses and four valves, the Jarvik-7 was more than twice as big as a normal human heart and could only be implanted in the biggest patients – mainly adult men. It had wheels, was as big and heavy (although not as tall) as a standard household refrigerator, and was normally connected to sources of compressed air, vacuum and electricity. In 1982, Jarvik and Kolff won approval from the US Food and Drug Administration to use it in human patients and implanted it that same year. Their first patient was a 61-year-old dentist called Barney Clark, who lived on the Jarvik-7 for 112 days. A second patient was implanted in 1984 and died after 620 days. History records a total of five patients implanted with the Jarvik-7 for permanent use, all of whom died within 18 months of the surgery from infections or strokes. The device has been tweaked and renamed many times; at the time of writing, it was the world’s only FDA-approved total-replacement artificial heart device used as a bridge-to-transplant for patients. Another widely used artificial heart, a direct descendent of the Jarvik-7, is the SynCardia. And in the early 2000s, Massachusetts-based company Abiomed unveiled a new heart that (unlike the SynCardia) was designed to be permanent – a total replacement heart for end-stage heart failure patients who were not candidates for transplant and couldn’t be helped by any other available treatment. But all these versions of artificial heart devices, whether they are meant to support the heart or replace it completely, are trying to copy the functions of the heart, mimicking the natural blood flow. The result is what’s called a pulsatile pump, the flow of blood going into the body like a native heart, at the average of 80 spurts a minute needed to sustain life. That’s the cause of the gentle movement you feel when you put your fingers to your wrist or your chest – your pulse, which corresponds with the beating of your heart. Today, scientists are working on a new wave of artificial hearts with one crucial difference: they don’t beat.

The Archimedes’ screw was an ancient apparatus used to raise water against gravity. Essentially, it is a screw in a hollow pipe; by placing the lower end in water and turning it, water is raised to the top. In 1976, during voluntary medical mission work in Egypt, cardiologist Dr. Richard K. Wampler saw men using one such device to pump water up a river bank. He was inspired. Perhaps, he thought, this principle could be applied to pumping blood. The result was the Hemopump, a device as big as a pencil eraser. When the screw inside the pump spun, blood was pumped from the heart to the rest of the body. It was the world’s first ‘continuous flow’ pump: Rapidly spinning turbines create a flow like water running through a garden hose, meaning the blood flow is continuous from moment to moment. Because of this, there is no ejection of the blood in spurts. There is no ‘heartbeat’. The patient’s own heart is still beating but the continuous flow from the device masks their pulse, meaning it is often undetectable at the wrist or neck. And the Hemopump lives on in spirit of newer devices. Abiomed’s newest heart prototype, Impella, uses similar technology boosted by leaps in modern engineering. It has a motor so small it sits inside the device at the end of the catheter, rather than outside of the body. The Impella is the smallest heart pump in use today – it’s not much bigger than a pencil – and as of March 2015 has been approved by the FDA for clinical use, supporting the heart for up to six hours in cardiac surgeries. Meanwhile, at the Texas Heart Institute, the HeartMate II is being developed. Like the Hemopump, it doesn’t replace the heart but rather works like a pair of crutches for it. About the size and weight of a small avocado, the HeartMate II is suitable for a wider range of patients than the SynCardia and has, on paper, a significantly longer lifespan – up to ten years. Since its FDA approval in January 2010, close to 20,000 people – including former US Vice President Dick Cheney – have received a HeartMate II, 20 of whom have been living with the device for more than eight years. All with an almost undetectable pulse.

The Future of Heart Transplants

I try to imagine a world full of people with no pulse. How, in such a future, would we determine if a person were alive or dead? “That is very easy,” says William (Billy) Cohn, a surgeon at the Texas Heart Institute, bringing my existential philosophizing to a halt. “When we pinch our thumb and it goes from pink to white and immediately back to pink, this means blood is flowing through the body. You can also tell if someone is still alive if they are still breathing.” He admits that once more of these devices are implanted into patients we will need a standard method of determining such a person’s vitals. Cohn imagines them wearing bracelets or even having tattoos to alert people to their pulseless state. I wonder how people will take to hearts that literally don’t beat. Perhaps it will be the same as when patients were offered the first heart transplants: resistance, followed by acceptance due to overwhelming need. “Any new procedure is going to have critics,” says surgeon Denton Cooley. “On the day that Christiaan Barnard did the first heart transplant, the critics were almost as strong, or stronger, than the proponents of [artificial] heart transplantation,” he says. “A lot of mystery goes with the heart, and its function. But most of the critics, I thought, were ignorant, uninformed or just superstitious.” Cooley performed the first US heart transplant in May 1968. And at 94 years old he still treasures the memory of the day, in 1969, when he implanted the first artificial heart into Haskell Karp and the “satisfaction that came from seeing that heart supporting that man’s life.” “I had always thought that the heart has only one function, and that is to pump blood,” he says. “It’s a very simple organ in that regard.”

This article originally appeared on Mosaic and appears here in edited form.