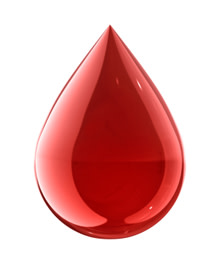 Already, researchers have imagined and built ways to detect one-in-a-billion cancer cells in a person's bloodstream in order to catch cancer in the act of spreading. Now, that technology is a little closer to moving out of the lab. Mehmet Toner and colleagues from Massachusetts General Hospital, the brains behind the tech, announced an agreement with a subsidiary of Johnson & Johnson to begin commercial development of their "liquid biopsy."

The microchip is dotted with tens of thousands of tiny posts covered with antibodies designed to stick to tumor cells. As blood passes over the chip, tumor cells separate from the pack and adhere to the posts. Scientists are wagering that this type of test, if successful, might also detect cancer early in its course, predict the odds for a recurrence, and assess a patient's general prognosis. [Healthday News]

Toner's team developed the prototype of the test back in 2007, and for the last several years have refined the extreme sensitivity needed to catch stray cancer

Because bloodstream-borne cancer cells are extremely rare — with about one cancer cell per billion blood cells — the technology must be able to detect extremely rare cells. Already, the Boston researchers have developed a prototype and they, along with four other research institutions, have received a $15 million grant from the organization Stand Up to Cancer to test the prototype. But that technology is expensive and complicated to use, with each chip costing about $500. [Boston Globe]

The aim of this new deal is to bring that $500 cost down to a reasonable number, creating a device that is simple and inexpensive enough to jump from the lab bench to the doctor's office.

The ultimate goal is to use the device to tailor cancer treatments to individual patients by monitoring cancer cell counts and by identifying the molecular attributes of an individual's cancer. For example, specific markers can highlight a more aggressive form of cancer or a tumor that will respond to specific cancer drugs, while genetic changes in the tumor might signal the need to change treatments. [Technology Review]

Furthermore, those stray cells in the blood

may be the ones chiefly responsible for cancer's spread through the body, the Boston Globe reports

. So spotting them, though they may be one in a billion, is key. To be sure, the device is still in its early stages; Toner and the other researchers have tested the method with about 200 patients so far. But given its potential to catch cancer before it spreads and to reveal a tumor's hidden traits—without the invasiveness of a biopsy—we hope it passes its own tests. Related Content: DISCOVER: The Body Can Beat Terminal Cancer—Sometimes