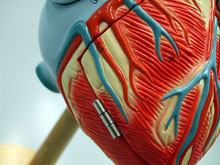 Emergency rooms will be a little emptier next Monday because the end of daylight savings time appears to reduce the chances of getting a heart attack.A new study published in the New England Journal of Medicine found a small but consistent dip in the number of heart attacks on the Monday after “Fall back,” probably due to people getting an extra hour of shut-eye.

The researchers believe the link between the time shifts and heart attacks is sleep.They say this could also explain previous research that shows more heart attacks occur on Mondays than any other day of the week, which was attributed to stress.But maybe it’s not just dread of the upcoming work week that’s stopping people’s hearts—it’s also staying up later on Sunday night.

Related Content: Discoblog: Is That Your Bluetooth, or Are You Just Having a Heart Attack? Discoblog: Erectile Dysfuntion Could Signal a Heart Attack 80beats: Sweet, Sweet Sunshine Helps Your Heart (and Practically Everything Else)