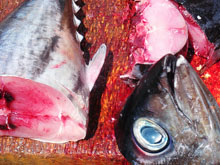 Think you might have a problem with body odor? Here’s a dose of perspective: A 41-year-old woman in Australia has smelled like rotten fish all her life.The pervasive smell emanates from her sweat, breath, and urine, and cannot be washed off or covered up.After being “sniffed” by doctor after doctor, all of whom waved her off as a hypochondriac or even prescribed vaginal cauterization, she was finally diagnosed with trimethylaminuria, or “fish malodor syndrome.”

Though she can now put a name to her condition, the bad news is that there is no cure.Trimethylaminuria is a rare genetic disorder that prevents the body from producing an enzyme that breaks down trimethylamine, a fishy smelling substance found in foods like meat, eggs, peas, soy beans, and er, fish.Only about 600 cases of fish malodor syndrome are known in the world. Cutting out trimethylamine from the diet can help, but there is no effective treatment.

Doctors reported the Australian woman’s case in the Medical Journal of Australia, in hopes of increasing awareness for trimethylaminuria, which is often socially crippling (just imagine being the “fishy smelling” kid in class). Since being diagnosed, she’s joined an online support group and sought genetic counseling.Some with the disorder develop obsessive hygiene habits or use smoking to obscure their fishy smell. It’s tough to see the silver lining for a cloud of fish odor, but at least she might have an easy time tricking those electronic noses at airport security.