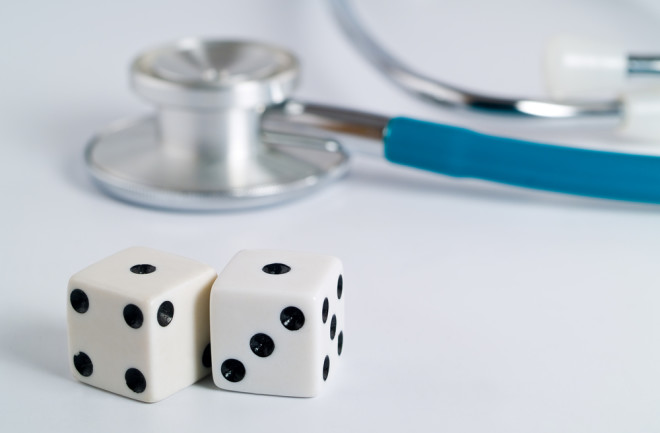 (Credit: Shutterstock) Whether we like to or not, we’re all gamblers. Every waking moment, countless stem cells inside our bodies are dividing in order to replace worn out biological machinery. But every time these perfectly healthy cells divide, roughly three mistakes occur in the genetic code—no one’s perfect. These mutations, though unpredictable, are typically benign, but sometimes this molecular game of Roulette takes an unlucky turn. “Most of the time these mutations don’t do any harm; they’re in junk DNA, or unimportant places,” says Johns Hopkins cancer researcher Bert Vogelstein. “That’s the usual situation, and that’s good luck. But occasionally they occur in a cancer driver gene, and that’s bad luck.” Today, there’s little doubt that mutations cause cancer, but there’s less consensus regarding the primary instigators of those mutations. Conventional wisdom holds that if we eat healthy, exercise regularly, breathe unpolluted air and drink clean water we can prevent cancer, so long as we aren’t genetically predisposed to the disease. But that’s only part of the story, according to Vogelstein.

Random chance is a primary driver behind most of the cancers in the latest study from researchers at Johns Hopkins. (Credit: Tomasetti et. al., Science [2017])In 2015, Vogelstein and his colleague Christian Tomasetti turned convention on its head when they presented evidence that random mutations were a third, primary driver of cancer in addition to environment and hereditary. They found that in the United States, the lifetime risk associated with 25 different cancers was strongly correlated to the total number of cell divisions that occur in those tissues. They likened their results to a car trip: the longer the drive, the higher the risk of being involved in an accident; the more your cells divide, the higher the risk of an unpredictable, cancer-causing error. That random chance played a significant role in cancer was a conclusion that provoked significant debate at the time. But that initial study was limited in scope to the United States, and didn’t include prostate and breast cancers—two of the most common. Two years later, in a study published Thursday in the journal Science, they’ve strengthened the argument that cancer is a bit of crapshoot, offering more details about the odds we’re playing with. “The main purpose of the new paper is to try, for the first time, to calculate how many of these mutations found in cancers are due to the environment, heredity or random mutations,” Vogelstein said. In their latest study, they analyzed biological data from 32 cancer types — including breast and prostate cancer — and found that two-thirds of mutations found in these cancers were spontaneous mistakes. They also collected data from 69 countries on six continents, and found the strong correlation between cancer incidence and the total number of stem cell divisions held up globally, regardless of environment. “It seems to make sense: the more divisions in stem cells, the more random mutations, the more cancer,” says Tomassetti.

Let’s Stop and Take a Breath

In cancer, the interplay between environment, heredity and random chance is a bit like pulling the lever on a slot machine. With each spin, or cell division, a different combination of all three factors could affect the result, and each type of cancer, in a sense, is weighted with odds. Bone and brain cancers seem to be ruled by chance, as most of the mutations are caused by unpredictable replicative errors. Lung cancer and prostate cancer mutations, on the other hand, are primarily driven by environmental factors — random errors play a role, but carcinogens that enter the body hold more influence. Extremely rare cancers tend to be driven by mutations passed down through the family tree. Their results gel with available evidence about the proportion of preventable cancers. According to Cancer Research UK, 42 percent of cancer cases are preventable, while the U.S. Centers for Disease Control estimates that 21 percent of annual cancer deaths could be prevented. In other words, the study in no way discounts the importance of early detection and making healthy choices to prevent cancer. Rather, researchers findings add a little clarity to why a perfectly healthy person with no history of cancer in the family could, nonetheless, be diagnosed with cancer. And for researchers, knowing there’s a third, powerful factor underlying cancer risk could inform the design of future investigations. Further, although random mutations may seem unavoidable now, they could someday be brought under our control. Though we can't predict how random mutations will cause cancer, knowing what we don’t know is a marked improvement from swimming in unknown unknowns. “It never was measured before, and if you don’t measure something, you can’t get a sense of how important that is,” Tomasetti said.