Question of the Day: How Do You Get Crabs From A Gorilla? 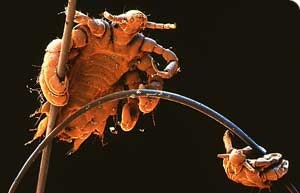 If pubic lice are not the sort of thing you want to be seen reading about, let me give you the opportunity to close your browser window right now. But if you're at all curious about the secret that pubic lice have been keeping for over three million years, the tale of a mysterious liaison between our ancestors and the ancestors of gorillas--read on. Many parasites tend to stick close to their hosts. A parasitic wasp may wander through forests and fields to find a caterpillar from a single species of butterfly in which it will lay its eggs. Blood flukes taste the water of their ponds for molecules from human skin. Wolbachia, a species of bacteria, never even has to leave its hosts, because it is passed down from mothers to their offspring. If a parasite sticks to its host for millions of years, their evolution may run on parallel tracks. As the host species splits in two, its parasite splits as well. One of the best studied cases of parasites and hosts coevolving this way comes from pocket gophers and their lice. Lice do not have wings, and their legs are better suited to gripping hairs than walking. As a result, the only way they can move from a pocket gopher to another host is during close contact. But pocket gophers are an unsocial bunch, generally living alone in their tunnels. What little contact they do make is with other members of their own species--their mates and their offspring. So the lice have few opportunities to meet new species. Even if they do end up on another species, they're unlikely to survive long. Their adaptations are finely tuned to their traditional hosts. The hairs of pocket gophers vary in size from species to species, for example, and their lice clamp onto their hair with mandibles that are just the right width. As a result, the evolutionary tree of pocket gopher species looks a lot like the evolutionary tree of their lice. (Check out the figure in this 2004 review: pdf.) There are a few cases in which the branches of the trees are not mirror reflections. There are a few ways in which parasites break the symmetry. Sometimes a parasite diverges into two new species within a single host. Sometimes a parasite species becomes extinct. And sometimes parasites shift to a new host species. The most spectacular example of such a leap occurred within the last century, when a virus moved from chimpanzees to humans, giving rise to the scourge we now know as HIV. (I go into more detail about cospeciation in my book Parasite Rex.) But back to lice. There are 5,000 known species of lice and probably many more. Most species of birds and mammals are hosts to lice, which are adapted for living on feathers and fur. Like other mammals, primates carry lice, and typically a species of lice can only survive on one species of primate. Their evolutionary trees are very similar, reflecting millions of years of coevolution. But there are some surprises lurking in the trees. As I wrote here, human head lice have a peculiar evolutionary history. According to one study, head lice form two genetically distinct populations that share a common ancestor over a million years ago. One of those groups is most common in Native Americans and other New World groups. 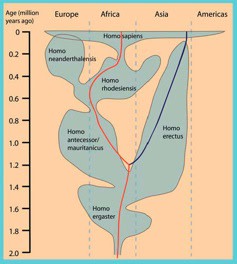 The authors--David Reed of the Florida Museum of Natural History and his colleagues--argue that their history reflects the history of our hominid ancestors. Paleoanthropologists generally agree that hominids originally evolved in Africa, and that several waves of hominids moved to Europe and Asia. Modern humans, however, descend from the hominids that stayed behind in Africa, evolving about 200,000 years ago, and spreading out to the other continents much later. Reed and his colleagues argue that one population of lice remained in Africa on our ancestors. The other population rode on top of the migrating hominids, which eventually evolved into other species such as Homo erectus and Neanderthals. Reed and his colleagues argued that humans must have made contact with Asian hominids some time in the last 100,000 years, whereupon they picked up the second population of lice. (Click on the figure to get a bigger view.) With this study behind them, the scientists then naturally turned their gaze downward. Along with head lice (Pediculus humanus), humans also have pubic lice (Pthirus pubis). Pubic lice--a k a crabs--usually spread from person to person through sexual contact. They lay their eggs in the pubic hair and grow into adults, feeding on skin and blood. And they only live on us. You can't get crabs from any animal. Like their common name suggests, pubic lice are crab-shaped, with wide-reaching legs that help it to move between widely-spaced hairs. They look very different from our lemon-shaped head lice. In fact, early entomologists put human head lice and human pubic lice in two separate genera, grouping each with lice from other apes. Pubic lice, in fact, look a lot more like lice found on gorillas than they look like human head lice. The scientists set out to recover the evolutionary tree of pubic lice, just as they had done with head lice. They analyzed DNA from human head lice, human pubic lice, as well as other species from the same genera that live on chimpanzees and gorillas. They also analyzed DNA from lice that live on monkeys and on rodents so that they could get a better sense of how pubic lice had evolved from a common ancestor with other species. The scientists not only drew branches for each species, but also estimated when those branches split over the course of history. Their conclusion, which they published today in BMC Biology, is just as striking as their earlier one about head lice. But it is hardly the same. We did not get pubic lice from other hominids. We got them from the ancestors of gorillas. The tree, which I've reproduced at the bottom of this post, tells the story. Thirteen million years ago, a distant ancestor of today's great apes was infested with lice. The lice evolved into two species that continued to live on the same host. One of those lice species was the ancestor of today's Pediculus (which includes head lice). The other species was the ancestor of Pthirus (pubic lice). About seven million years ago the ancestors of gorillas split off from the ancestors of humans, chimpanzees, and bonobos. Both ape lineages carried the Pediculus and Pthirus lice. But then, Reed and his colleagues argue, two extinctions took place. The Pediculus lice became extinct in the ancestors of gorillas. The Pthirus lice became extinct in the human/chimp lineage. Millions of years passed. The ancestors of humans and chimpanzees split, and their lice evolved into distinct--but similar--species, including what we now know as head lice. And then, about three and a half million years ago, our hominid ancestors (perhaps Lucy?) picked up pubic lice from the ancestors of gorillas. Is this evidence of a Pliocene love that dare not speak its name? Not according to Reed. He and his colleagues suggest that hominids might have gotten crabs by eating gorilla flesh, perhaps scavenging a carcass. Or they might have slept at nesting sites that gorillas contaminated with their lice. This study just so happens to have come out a few months after another team of scientists showed that chimpanzees not only gave humans HIV but also gave gorillas a related strain of the virus. If chimpanzees can give gorillas a blood-borne virus, it's not too surprising that gorillas could give hominids some lice. But there are a couple intriguing implications this study raises. One is that gorillas and hominids lived close together. The fossil record hasn't had a whole lot to say on this subject. The oldest hominid fossils--belonging to species closer to us than to other apes--come from the eastern Sahara, Kenya, and Ethiopia. By 3.3 million years ago, hominids were in South Africa as well. These hominids lived in complicated landscapes, made up of woodlands and savannas. Gorillas today live in a very different sort of place: the forests of central and western Africa. Paleontologists have yet to find a fossil gorilla bone, so they have little to say about where their ancestors lived over the past seven million years. Were there once savanna gorillas? Were there once deep-jungle hominids? And then there is the matter of where the lice live. Today, lice live on little islands of hair on an ocean of hairless human skin. They are clearly adapted to our relatively hairless bodies. The authors suggest that their results may mean that hominids were already losing hair 3.3 million years ago. The gorilla lice needed an empty ecological niche--pubic hair--that they could occupy in order to survive. If hominids had full-body hair, the lice that already lived on it might have been able to outcompete an invader. This study is just the latest to demonstrate how much parasites can tell us about our past. While fossils remain hidden in the ground, while extinct species of hominids are no longer around to give us clues to our origins, our lice--and ulcer bacteria and tapeworms and other pathogens--are waiting for our questions. So when scientists call for the preservation of endangered parasites (pdf), don't laugh--they want to preserve history.