A healthy man in his 30s starts lifting weights, and his physical condition worsens. 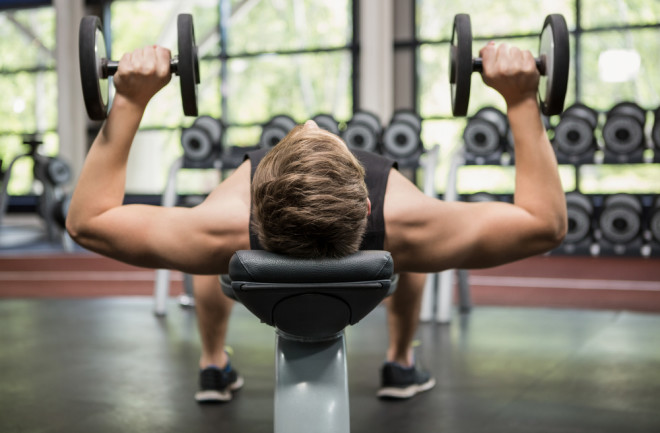 Jay, a physician in his early 30s, was a healthy guy who ran 6 miles a day, loved nature and animals, and spent free time hiking and biking. One summer, he decided to start weight training.

The problem started simply. He had finished a training session at the gym, doing upper and lower body exercises with barbells and finishing with sit-ups. A few days later, he felt more sore than usual. “My neck feels really stiff,” he told me. “I probably overdid it at the gym.”

I examined his neck and could see no external injuries. He didn’t have any pain when I pressed on the area, and he could move his head freely. He had no neurological issues, and an X-ray was normal. It likely was just a routine muscle strain.

These kinds of strains around the neck are common and usually caused by sports activities, automobile accidents or falls. We didn’t see any red flags, and Jay started taking ibuprofen, an anti-inflammatory medication that’s standard initial treatment for neck strains. I expected him to recover and soon make appearances at the gym again.

That didn’t happen. A few weeks later, Jay was back in my office in worse shape. “Something’s not right,” he said. “The ibuprofen only helped a little, and the muscles in the back of my neck are getting weaker. My head feels heavier, like it has stones in it.”

This was alarming. Simple muscle strain usually gets better with rest and anti-inflammatory drugs. Why wasn’t Jay improving? Was this one-time strain from a heavy workout causing lasting muscle fatigue? Or were his nerves affected?

We scheduled him for an MRI of the head and neck and an appointment with Dr. Sanders, a neurologist.

The MRI and lab tests, including a complete blood count and basic metabolic panel, all came back normal. Sanders checked muscle enzyme levels and found unusually high concentrations of the enzyme creatine kinase, an indicator of muscle injury. High levels are found in people with inflammatory muscle diseases, as well as in elite athletes and in people of moderate fitness who participate in a physically demanding event, like a marathon. Strenuous exercise builds muscles by creating micro-tears in muscle fiber that the body regenerates, which increases the enzyme.

We started Jay on high-dose prednisone, a steroid that decreases inflammation, and referred him to Dr. Baker, a rheumatologist. His condition might have been due to an especially strenuous workout. He might also have developed an autoimmune disease, a condition in which the immune system reacts against and destroys healthy tissue — in this case, the muscles in the back of his neck. While prednisone could knock down the inflammation, we still needed to find out what was causing it.

A week later, Jay walked into Baker’s office. He was carrying something in his hands: his head. He had developed a complete head drop over the course of two weeks and could not raise his chin off his chest.

Jay used both hands to cup his chin and push it up, supporting the entire weight of his head while interacting with Baker and me. He rested often due to exhaustion. The average human head weighs about 10 pounds; the seemingly effortless act of holding your head up involves an intricate balance among the neck muscles.

Jay was now unable to drive and no longer working. His voice was shaky, and it looked like he hadn’t slept in days. At this point, with Sanders and Baker collaborating, Jay underwent many more tests, including electromyography, which evaluates how well muscle fibers are working, and nerve conduction studies, used to diagnose nerve disorders and help differentiate between muscle and nerve problems. The tests did not reveal an ailment.

Finally, a biopsy taken from a muscle near Jay’s neck showed that his muscle cells were dying, but offered no clue why this was happening. Inflammation was minimal, and blood levels of specific antibodies, indicating that the immune system was reacting against the body, were absent.

“Will this improve? Will I ever be able to hold my head up and function normally?” Jay asked.

“It’s impossible to tell right now,” Baker said. “The symptoms are very unusual, and you haven’t responded to prednisone, but we can try increasing the dose. This could be a form of Parkinson’s or ALS [amyotrophic lateral sclerosis].”

Jay swallowed hard. He knew from his medical experience that all of these options were serious.

ALS, or Lou Gehrig’s disease, is a rapidly progressive and fatal neurological condition in which the nerve cells controlling muscles are attacked. Patients lose the ability to move their arms and legs, swallow food or speak. Muscles in the diaphragm and chest wall soon weaken, causing an inability to breathe. Within a few years, patients usually die from respiratory failure.

“Running away to an island, somewhere warm with clean air and plenty of greenery,” he said.

Jay was fitted with a body brace that extended to his waist so he could continue with his daily activities. The brace had a neck support that immobilized and held up his head, and the weight of his head was redistributed to the muscles in his back. He took off the device only to sleep or shower. It was an uncomfortable contraption, but he was determined to continue working and living as much of a normal life as possible.

Yet his condition worsened. He easily became short of breath, barely able to walk two blocks before getting fatigued. He also started to have trouble swallowing.

His symptoms, imaging and lab results didn’t fit any specific disease pattern, and none of the consultants had ever seen a case like his. His body seemed to be reacting against itself, destroying healthy muscle tissue and causing inflammation.

Baker, the rheumatologist, decided to start intravenous immunoglobulin (IVIG), which consists of pooled antibodies extracted from the blood of thousands of plasma donors. IVIG is used to treat a variety of autoimmune diseases by suppressing harmful inflammation. He also started Jay on two powerful immunomodulating drugs: tacrolimus and azathioprine. These drugs are typically used in patients receiving organ transplants to prevent their immune systems from rejecting donated organs. They have many side effects, such as infection, kidney disease and diabetes.

If Jay’s body was turning on itself, it was time to do everything possible to stop the damage.

For the next 18 months, Jay went through several rounds of IVIG and used powerful immunomodulating medications. The final diagnosis was an extremely rare condition called necrotizing autoimmune myopathy, which meant his muscles had been attacked and destroyed by his immune system. No one knows what triggers this reaction in the body. Suspects include exercise, muscle overuse or injury, viruses and even medications, such as cholesterol-lowering drugs.

Jay went through painful, rigorous physical therapy. His condition finally improved, and he stopped using the body brace and tapered off the medications. He recovered about 50 percent of his baseline strength in his neck muscles and returned to performing daily activities, although his neck was weaker and could ache at the end of a long day or with moderately strenuous use. He couldn’t run marathons, but he took up hiking again — on a beautiful island where he opened a medical practice and continues to treat patients.

Shilpa Ravella is a gastroenterologist at Columbia University Medical Center in New York. The cases described in Vital Signs are real, but names and some of the details have been changed.

[This article originally appeared in print as "Head in Hand."]

More From Discover
The Sciences
DNA Ancestry Tests Can Expose Family Secrets
Health
This is How Much Water You Should Actually Be Drinking Each Day
Health
What is Epilepsy and What Should We Know About it?
The Sciences
Your Body, the First 5 Minutes After You Die
Health
A Blood Test That Screens For Multiple Cancers At Once Promises To Boost Early Detection
Health
Feeling Sleepy After a Thanksgiving Meal? It Might Not Be the Turkey
Recommendations From Our Store
My Science ShopDiscover STEM Kits
My Science ShopDiscover 2022 Calendar
My Science ShopStrange Science
My Science ShopElements Flashcards
Shop Now
Stay Curious
Join
Our List