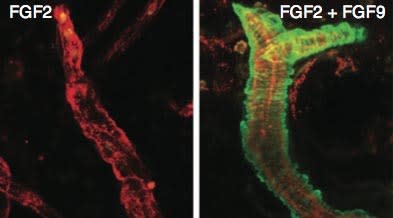 What’s the News: Biologists may have been barking up the wrong tree when it comes to growing new blood vessels to provide blood to tissues damaged by heart disease. The vessels that form under the influence of a growth factor intended to kick-start the process are sickly and shrivel up within a year, but a new study

in Nature Biotechnology ($) shows that focusing on making the surrounding cells provide support may solve the problem. What’s the Context:

The Future Holds: Further experiments to see how FGF9 can work together with FGF2 in potential treatments for heart disease. The researchers also point out that FGF9 might be useful for encasing transplanted blood vessels