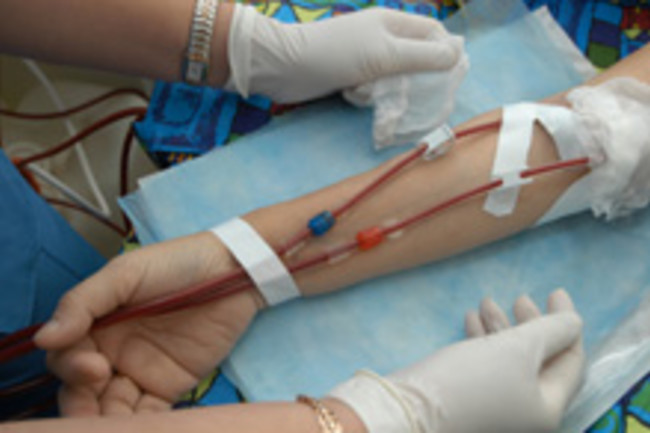 Blood vessels grown from patients' own skin cells have been used to make the process of dialysis safer and easier for people with failing kidneys, and researchers say the process may one day be used to

custom-produce blood vessels for patients with circulatory problems in their hearts or legs [AP].

Kidney patients need frequent dialysis to filter their blood, and that requires

a vessel, or shunt, to connect them to dialysis machines. This can be made from their own vessels. But because dialysis is done so regularly, kidney patients often run out of healthy vessels and need an artificial one, often made out of [Gore-Tex]. Those are prone to infection and inflammation [AP].

For the new study, published in The Lancet, researchers took small snips of skin from the backs of ten patients' hands and extracted

two cell types -- fibroblasts from the skin which provide the structural backbone of the vein, and endothelial cells to form the lining of the vein [Reuters].

In the lab, those cells were grown into sheets of tissue that were then rolled into tubes measuring about six inches long, which then fused at the seams. Those tubes were essentially new blood vessels. The whole process took between six to nine months. The new blood vessels were implanted in the arms of the ten patients, all of whom had advanced kidney disease.

Three of the patients suffered a failure during the first three months of the trial -- a not-unexpected result considering the patients' risk factors, [lead researcher Todd] McAllister said. Another withdrew from the study and a fifth died of unrelated causes. The rest of the grafts have functioned for as long as 20 months [Los Angeles Times].

Researchers say the new procedure is very promising, and could be useful for a wide range of people with circulation problems.

"It's basically a piece of plumbing to bypass blockages" [AP]