Promising Antibiotic Could Spawn the Next Superbug

Bacteria-killing viruses called bacteriophages can speed up pathogen evolution by a billion years. 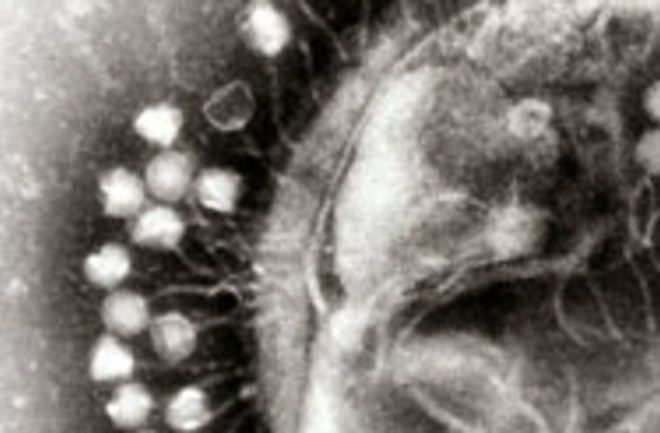 An electron micrograph of bacteriophages attached to a bacterial cell. | Image <a href="http://en.wikipedia.org/wiki/Bacteriophage">Wikipedia</a>

­A promising next-generation antibiotic— bacteria-killing viruses called bacteriophages—could end up creating the next superbug, two scientists warn. Their research, published in January, shows that bacteriophages can rapidly accelerate the evolution of human pathogens by transferring genes from one bacterial species to another. The recipient “could literally bypass a billion years of evolution in a single event,” says microbiologist John Chen of New York University.

The viruses have been known to transmit genes between bacteria of the same species. But Chen and coauthor Richard Novick, also of NYU, showed that bacteriophages could even shuttle deactivated genes for the toxic shock syndrome toxin from Staphylococcus aureus—one of the most prevalent, and increasingly lethal, causes of hospital infection—to the distantly related Listeria monocytogenes, a common foodborne pathogen that killed 20 in Canada last summer. Bacteriophages can also transport plasmids, which often carry anti­biotic resistance.

A staph-enabled Listeria bacterium “would be a monster,” says Pascale Cossart, a Listeria expert at the Pasteur Institute in Paris who was not involved in the research. The gene transfer is also hard to detect. “It could be happening all over the place,” Novick says, “and we would never see it.”