Population genetics on the cheap! 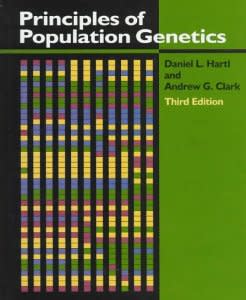 Textbooks are often very expensive. For example the most recent edition of Principles of Population Genetics will run you $50-$100. But it has come to my attention that the third edition of this textbook is potentially much cheaper, with some copies in the <$10 range! Population genetics isn't quite like math, where 19th century works are still interesting to the non-specialist (population genetics was 'invented' in the first decades of the 20th century!). But a lot of the older material is totally relevant and on point, so these previous editions are not just simply historical curiosities. Much of the third and fourth editions of this particular work overlap anyhow, the big difference obviously being genomic techniques and such. But for that you should probably read papers, many of which are thankfully being put out as preprints now. While I'm at it, I notice there are some affordable copies ($10-$20) of Genetics of Human Populations. This is a very old work from decades ago. But it is an encyclopedic treatment of the post-World War II human genetic literature, much of which has been forgotten or faded, but perhaps should not be discarded so lightly.... Update: I realize on second thought that it was remiss of me to not point out that Graham Coop and Joe Felsenstein both have free population genetics resources which readers might find highly useful. Also see these notes from U Conn.