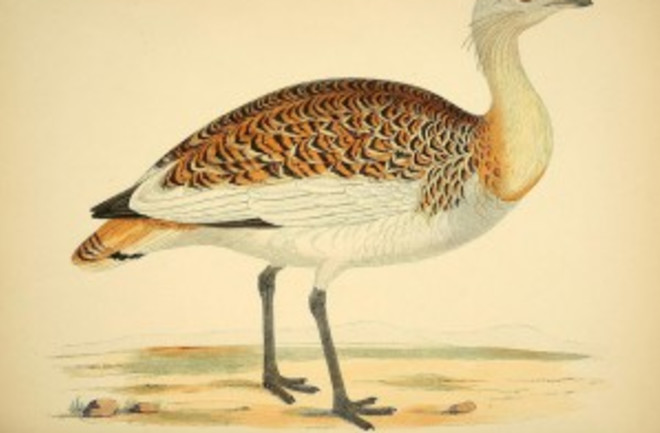 Image: Flickr/Biodiversity Heritage LibraryNo, that's not a typo. Bustards are birds, and these birds can teach us a thing or two about romance. That's because male bustards get with a lot of ladies, which can make passing around STDs a real problem. Fortunately, lady bustards are hip to this, and they make sure to examine the male's cloaca (the awesome "universal hole" of birds and reptiles, out of which comes poop, pee, and eggs!) looking for the telltale signs of infection. If the male looks like he's got an STD, it's no go. So, to help keep themselves infection-free, male bustards eat specific kinds of beetles that reduce STDs, even though the bugs are poisonous. And it's only the males that do this--they will pick the medicinal/poisonous blister beetles out of an array of food choices, while the females will studiously avoid the nasty bugs, suggesting that the males are self-medicating to improve their odds with the ladies. As any worthwhile polygamous male bustard should!Males of a strongly polygynous species consume more poisonous food than females. "We present evidence of a possible case of self-medication in a lekking bird, the great bustard Otis tarda. Great bustards consumed blister beetles (Meloidae), in spite of the fact that they contain cantharidin, a highly toxic compound that is lethal in moderate doses. In addition to anthelminthic properties, cantharidin was effective against gastrointestinal bacteria that cause sexually-transmitted diseases. Although both sexes consumed blister beetles during the mating season, only males selected them among all available insects, and ingested more and larger beetles than females. The male-biased consumption suggests that males could use cantharidin to reduce their parasite load and increase their sexual attractiveness. This plausibly explains the intense cloaca display males perform to approaching females, and the meticulous inspection females conduct of the male's cloaca, a behaviour only observed in this and another similar species of the bustard family. A white, clean cloaca with no infection symptoms (e.g., diarrhoea) is an honest signal of both, resistance to cantharidin and absence of parasites, and represents a reliable indicator of the male quality to the extremely choosy females. Our results do not definitely prove, but certainly strongly suggest that cantharidin, obtained by consumption of blister beetles, acts in great bustards as an oral anti-microbial and pathogen-limiting compound, and that males ingest these poisonous insects to increase their mating success, pointing out that self-medication might have been overlooked as a sexually-selected mechanism enhancing male fitness." Related content: NCBI ROFL: What does bed bug sex smell like? NCBI ROFL: Science proves women who wax have better sex. NCBI ROFL: What do Republicans dream about? (Hint: it's not sex.) NCBI ROFL: Double feature: Duck, duck, dick!