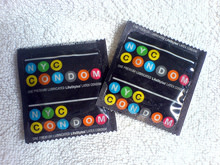 You might remember the story that broke in early August saying that the Centers for Disease Control had greatly underestimated the number of Americans who become infected with HIV each year. The CDC had said the total was about 40,000; after correcting a mistake in their method of counting, the new estimate was 56,300, a 40 percent increase. In response to this alarming new number, condom company One made a special delivery to both John McCain's and Barack Obama's campaign headquarters: 56,300 condoms. One says the shipments are campaigns' to do with as they wish, but the company encourages them to donate the condoms to community centers or non-profit organizations. Is this a publicity stunt for One to garner name recognition for their product? Absolutely. But given the necessity of using condoms to bring down the number of sexually transmitted infections in the U.S. and the world—and the political opposition to doing so—a condom company may as well be pushing the issue. Somebody has to.