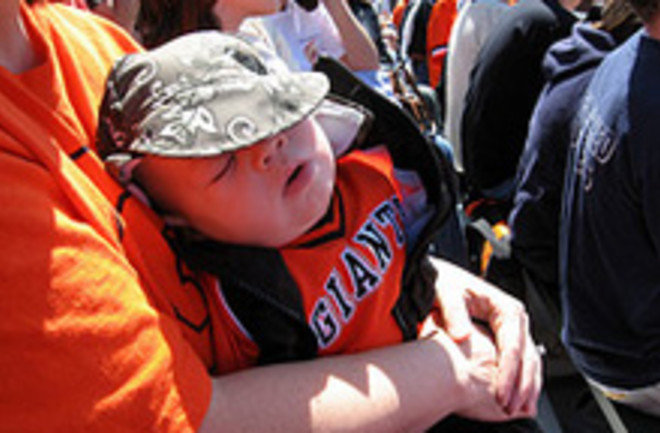 Picture trying to hit a 95 mile-per-hour fastball. Now picture trying to do it with jet lag. Don't worry—it gets even harder for the pros, too. In a study funded by Major League Baseball, Christopher Winter of Martha Jefferson Hospital Sleep Medicine Center in Charlottesville, Virginia, studied the circadian sleep rhythms of professional ball clubs traveling around the country over a decade. He said today at the Associated Professional Sleep Societies meeting that he found whichever team was better adjusted to the time zone they played in won more often. In crunching the numbers, Winter figured it takes one day to adjust for each time zone a team crossed. So a team that flew from the Pacific to the eastern time zone was three days away from being back on its circadian rhythm. In 80 percent of MLB games, the two teams are equally adjusted to their time zone, so Winter says no sleep advantage appears. But when one team has had more time to adjust its biological clock than the other, the advantage begins. A team that was better adjusted by a day or two compared to its opponent enjoyed a small advantage, winning about 52 percent of the time. But when there was a big gap—one team was off by three days and the other was already adjusted to the time zone—the better adjusted side won 60 percent of the time. So the New York Mets will be at a disadvantage tonight when they play at home after having just finished a West Coast road trip—their opponents, the Arizona Diamondbacks, have already been in eastern time for several days. With an off day yesterday, however, the Mets are only two days off their circadian rhythms, according to Winter, which lessens Arizona's sleep advantage. Let's just hope that if National Basketball Association officials follow through on their plan to create European franchises, they give teams a break between games.