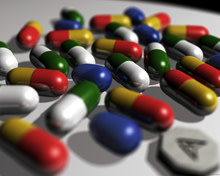 While the science behind the placebo effect is still unclear, a new study may have found a group for whom it's especially effective: children. Kids' tendency to be more open to the power of suggestion than adults appears to spill over into medicine. French pediatricians reviewing data from many different studies of children and adults receiving either anti-epilepsy medication or a sugar pill found that while children actually responded worse to the drugs than adults, they responded 50 percent better to a placebo, with one in five of the kids seeing a serious reduction in their seizure rates. At this point, the researchers don't want to get ahead of themselves; they say the study really affirms something they already knew, that children respond differently to drugs than adults do. As a result, more research should be done strictly on the effect of pharmaceuticals on kids, rather than just assuming they'll react to a drug the same way adults do. But the French researchers' findings might get to the heart of the placebo effect—believing a drug will help you probably increases the chances that it will help you. After all, children are more likely than adults to believe that something handed to them by an authority figure in a white coat is going to make them feel better. So perhaps they are the ideal placebo patients.