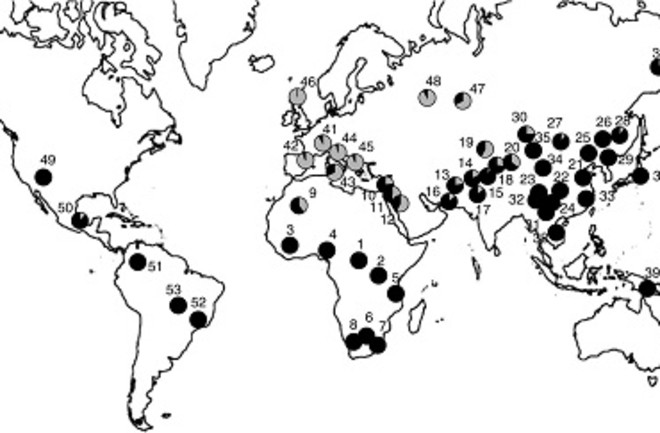 SLC24A5 The above figure is from Norton et al.'s Genetic Evidence for the Convergent Evolution of Light Skin in Europeans and East Asians. It shows that rs16891982 on the SLC45A2 locus exhibits strong differentiation between Europe and the rest of the world. This is in contrast to SLC24A5, where the well known allele which differentiates Africans/East Asians from Europeans is found at very high frequencies across Western Eurasia (both my parents are homozygotes for the "European" variant; in fact SLC24A5's derived variantis found at fractions on the order of ~50% in eastern and southern India). The ancestral allele on SLC24A5 is very difficult to find in Europeans, it is so close to fixation for the derived variant. In contrast SLC45A2's minor allele is segregating at appreciable frequencies in places like southern Spain, and the derived allele is not fixed even in Northern Europe. I won't review the literature on the genomics and evolution of human pigmentation at this point. Rather, I'll just note that it seems most of the inter-population variation is controlled by a handful of genes. It's a polygenic trait, but just. Second, a fair amount of evidence has emerged that some of the lightening derived variants have increased in frequency only very recently (e.g., on the order of ~10,000 years). Pigmentation is then a peculiar trait where the genetic underpinnings can give historical phylogenetic information because of the varied dates of differentiation and selective sweeps. Below I've collated results from several studies on frequencies of SLC45A2. I invite readers to persue them. I will say two things. First, the frequency of the "European" variant in ~140 northern Ethiopians is 0%. This is peculiar for a population which may be on the order of ~50% West Eurasian. Second, the fraction of SLC45A2 derived variant in South Asians coincidentally tracks the "NE Euro" percentage in Zack Ajmal's results.

A Decreasing Gradient of 374F Allele Frequencies in the Skin Pigmentation GeneSLC45A2, from the North of West Europe to North Africa