If we look at each wordsum category separately, which ones are significantly different? I ask because the trend seems to reflect the liberal-conservative split (low and high lean left; middle leans conservative). It also seems to mirror educational attainment–moderately educated people (some/completed college) are more likely to be conservative. Hard to suss out causal factors here.

Well, here's a logistic regression from the GSS: 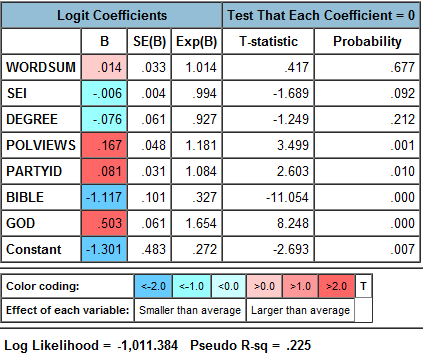 Don't take it too seriously. A lot of these are categorical variables which happen to be rank ordered (e.g., most liberal = 1 and most conservative = 7). But as you can see the WORDSUM correlation disappears when you throw in other variables. In fact, even education isn't statistically significant anymore. That seems ludicrous, but remember that Biblical literalism is strongly correlated with lower levels of education and intelligence. Once you throw that in there as an explanatory variable it sucks up all the oxygen.