Regular readers will know that I have an interestinplagiarism. Today I discovered an amusing case of plagiarism in a paper about plagiarism. The paper is called The confounding factors leading to plagiarism in academic writing and some suggested remedies. It recently appeared in the Journal of the Pakistan Medical Association (JPMA) and it's written by two Saudi Arabia-based authors, Salman Yousuf Guraya and Shaista Salman Guraya. Here's an example of the plagiarism: a 2015 paper by Helgesson and Eriksson is the source. As well as verbatim overlap (in yellow), there are places where a word from the source has been replaced with a synonym, e.g. "sentence" -> "stanza". I've highlighted such substitutions in red. This replacement is known as Rogeting and it's often used as a way of evading plagiarism detection software. There are now even software tools that Roget automatically. 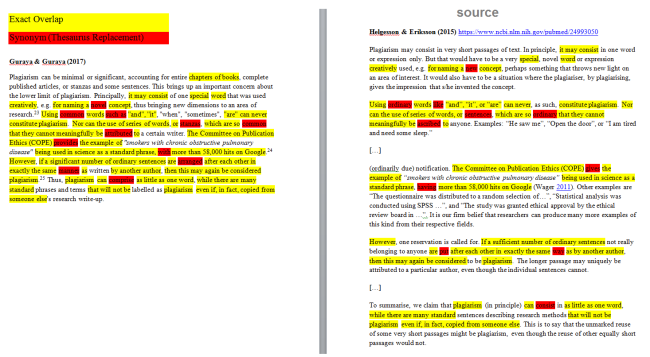 The Helgesson and Eriksson paper is cited by Guraya and Guraya, but not in the right place, and not in a way that makes it clear that text has been copied from it. Perhaps Guraya and Guraya were ignorant of proper citation practices and the nature of plagiarism? Maybe they need to read up on it. I hear there's an article out in the JPMA on this very topic.

Guraya SY, & Guraya SS (2017). The confounding factors leading to plagiarism in academic writing and some suggested remedies: A systematic review. JPMA. The Journal of the Pakistan Medical Association, 67 (5), 767-772 PMID: 28507368