A few months back, Carl Zimmer published a short article on the startling widespread prevalence of neurocysticercosis; the larval infective form of the pig tapeworm Taenia solium that just so happens to infect the human brain. Check it out, but beware!, you will be learning about a parasite that gives unwelcome deep tissue massages in your gray matter and you will see photographic evidence of it. The real trouble with this pig parasite, aside from it's distressing appearance in your cerebral headquarters, is that you can acquire neurocysticercosis even if you don't consume pork products. This is the surprise kicker, the coal in your Christmas stocking. 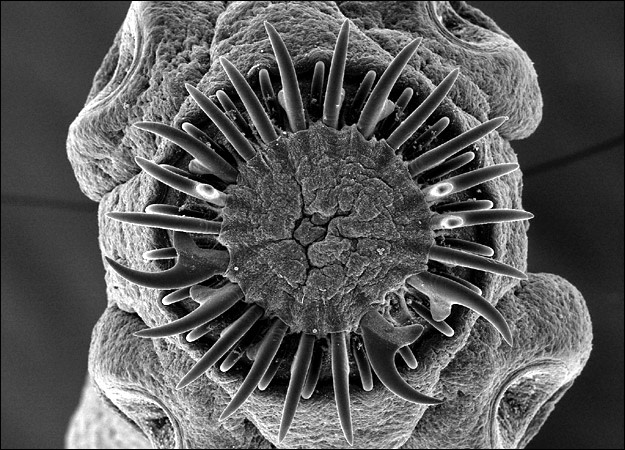 The mouth of the adult pork tapeworm, Taenia solium. The tapeworm typically lives in the intestines of pigs but may infect those that eat undercooked pork. The larva produced by the adult worm are passed in the feces and may go on to infect the organs and tissues of humans. Image: Dennis Kunkel Microscopy, Inc. This is understandably alarming for people who choose to not eat pork but what if your culture and religion prohibits its very consumption? What does it mean to those that belong to a group with strongly delineated food taboos which just so happen to include those of the swinish variety? Say, Jews that are kosher and adhere to kashrut, Judaism's set of dietary laws, that forbid consumption of pork because pigs don’t ruminate, or "chew the cud" (Leviticus 11:7, Deuteronomy 14:8)? Sadly, this went beyond being a thought exercise to a reality for Orthodox Jews living in New York City in the early '90s when isolated cases of neurocysticercosis arose in their community. These are not the sort of folk contemplating whether to include bacon bits into the dinner salad or debating whether to add just one more strip to a breakfast sandwich so just how exactly did they find themselves infected with a pig parasite? This sounds like an far-fetched urban tale but is rather a cautionary story that speaks to fascinating socioeconomic implications that appear in many developed cities worldwide. In the summer of 1991, three practitioners of the Orthodox Jewish faith appeared on separate occasions in local NYC hospitals with recurrent seizures. Radiology showed evidence of brain lesions that were soon identified as cysticerci, the larval form of the pig tapeworm that had formed protective cysts within the brain. Most peculiarly, the patients were all absent of any of the risk factors that increase susceptibility to neurocysticercosis - consumption of undercooked pork products and/or traveling to foreign countries with endemic taeniasis (1). Examining related family members of the original three patients identified an additional seven people from two families that showed positive antibodies to the infection (known as seropositivity), including a fourth person that had experienced a seizure sending them to the ER.

The life cycle of the pork tapeworm. Infection with the tapeworm is strongly associated with pig husbandry along with poor hygiene. Accidentally ingested eggs can result in larva that migrate throughout the body eventually forming cysts. Image. CDC. Click for source. After some epidemiological sleuthing, the culprit was soon identified - the families of these patients employed housemaids, all recent emigrees from Latin and Central American immigrants that were infected with the adult tapeworm infection and had transmitted the infective eggs to their employers. Other housemaids fled from investigators after being asked for blood and stool samples, presumably terrified of being implicated in the spread of an epilepsy-causing wormy. A common practice in this Orthodox Jewish community, these families had employed an average of over three housemaids from endemic countries in the past five years (1). Shortly after this unusual crop of cases, a group of researchers from the CDC in Atlanta and the Maimonides Hospital in Brooklyn conducted a study of the Orthodox Jewish community to identify how prevalent neurocysticercosis had embedded itself in the community. Between November 1992 and February 1993, over 7000 households comprising a total of 35,000 people were examined for infection (2). An impressive number culled for a study into brain parasites, amirite? They must have had a powerfully persuasive representative to sell everyone on relinquishing blood samples. Thankfully, only 23 people, representing a slim 1.3% of the population, showed positive antibodies to the parasite. Though this seems like a negligible prevalence rate - 1% that’s it?! - consider that populations with a 1% prevalence rate are deemed hyper-endemic regions in the public health world (3). The researchers, in fact, deemed “exposure to T. solium in this community [to be] unexpectedly high” (2). The researchers confirmed that infected Latin housekeepers in Orthodox Jewish households were the etiological cause of local cases of neurocysticercosis. They also found that housemaids originating from Central America and those charged with child care responsibilities were highly correlated with spread of the disease (2). These women were raised in countries with exemplary levels of pork consumption, along with endemic pig tapeworm, or taeniasis, infection, and physically transported the parasite to non-endemic regions. Though taeniasis and neurocysticercosis is a disease of poverty, it will gladly ascend the socioeconomic ladder given the opportunity. The parasite is a social climber that arises from inauspicious beginnings - wallowing in the pigpen, if you will. But invite it into your home and it will climb another rung.

The global distribution of cysticercosis infection. Hot spots of infection, areas of high endemicity, are found in regions with high rates of pig product consumption. The WHO estimates that the disease affects 50 million people worldwide and causes an estimated 50,000 deaths a year. Image: WHO. Click for source. A 2005 study documented this particular phenomenon in Peru, looking at housemaids that had left endemic towns to work for the more affluent in cities where the infection is scarce. These ladies migrate from areas that often lack modern amenities, such as closed sewage systems, potable water supplies and electricity, and in nearly 75% of cases, with households that rely on raising pigs to boost home income. In doing so, they carry the tapeworm into unsuspecting homes - investigators found that 1.2% of these women suffered from taeniasis infection. And, yes, the infection is transferred to their employers. Of those Peruvian employers that acquiesced to blood samples and CAT scans, 23% showed antibodies for infection. These Peruvian housemaids are the Typhoid Marys of T. solium. In the Peruvian study, 60% of families were found to use housemaids to cook, assist with kitchen duties or to help with childcare (3). These services all greatly increase the chances of transmitting neurocysticercosis if proper food and sanitary hygiene isn't practiced, which may be compromised if you hire someone who hasn't been raised with, say, tiled bathrooms with flushing toilets and porcelain sinks. Hygiene is a learned luxury that only a few of us in this grimy world are accorded and, lemme tell ya, running water and hand sanitizer really help with these sorts of things. Hygiene has a price. In the early 1990s, Orthodox Jew's discovered this principle. Despite their best intentions in diligently adhering to strict dietary laws, rituals and rules that have protected their physical and spiritual health for millennia, they found that they were alarmingly susceptible to a porcine disease owing to their practice of employing people from outside their own cultural and socioeconomic strata. We all have our own salubrious observances and rituals that we like to think maintain our health and well-being, from washing our hands, splashing bleach around the bathroom and kitchen, or even following certain dietary restrictions. But however aseptic and sanitized you live your day-to-day life, the reality is that we live in a world with other people - our coworkers, our friends, the people who serve us food in restaurants, the people we drink with at the bar, the children our kids play with, in short, everyone else. Resources The Wikipedia page devoted to "

is a superbly fun and fascinating read. In a similar vein, this free academic paper on "Food taboos and their origins" is also enjoyable. Get it here. An article in the journal Radiology details a case of neurocysticercosis in an Orthodox Jewish woman. She had employed a Mexican housekeeper who had been infected with taeniasis for several years before presenting with seizures on the left side of her face and arm before being diagnosed in 1999. A handy guide for Jewish family that keep mitzvah, the commandments of the Torah, while employing non-Jewish housekeepers. References 1. PM Schantz et al. (1992) Neurocysticercosis in an Orthodox Jewish community in New York City. N Engl J Med327: 692–695 2. AC Moore et al. (1995) Seroprevalence of Cysticercosis in an Orthodox Jewish Community. Am J Trop Med Hyg 53(5):439-442 3. BN Huisa et al. (2005) Taeniasis and cysticercosis in housemaids working in affluent neighborhoods in Lima, Peru. Am J Trop Med Hyg. 73(3): 496–500