Parasitic worms leave millions of victims paralyzed, epileptic, or worse. So why isn’t anyone mobilizing to eradicate them? 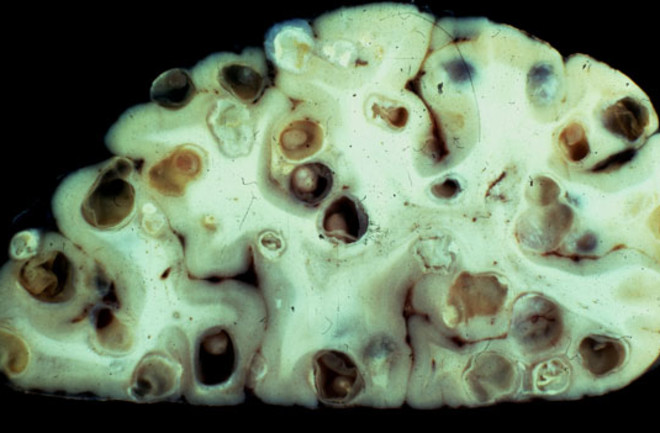 A human brain overrun with cysts from Taenia solium, a tapeworm that normally inhabits the muscles of pigs. (Credit: Courtesy Theodore E. Nash)

Theodore Nash sees only a few dozen patients a year in his clinic at the National Institutes of Health in Bethesda, Maryland. That’s pretty small as medical practices go, but what his patients lack in number they make up for in the intensity of their symptoms. Some fall into comas. Some are paralyzed down one side of their body. Others can’t walk a straight line. Still others come to Nash partially blind, or with so much fluid in their brain that they need shunts implanted to relieve the pressure. Some lose the ability to speak; many fall into violent seizures.

Underneath this panoply of symptoms is the same cause, captured in the MRI scans that Nash takes of his patients’ brains. Each brain contains one or more whitish blobs. You might guess that these are tumors. But Nash knows the blobs are not made of the patient’s own cells. They are tapeworms. Aliens.

A blob in the brain is not the image most people have when someone mentions tapeworms. These parasitic worms are best known in their adult stage, when they live in people’s intestines and their ribbon-shaped bodies can grow as long as 21 feet. But that’s just one stage in the animal’s life cycle. Before they become adults, tapeworms spend time as larvae in large cysts. And those cysts can end up in people’s brains, causing a disease known as neurocysticercosis.

“Nobody knows exactly how many people there are with it in the United States,” says Nash, who is the chief of the Gastrointestinal Parasites Section at NIH. His best estimate is 1,500 to 2,000. Worldwide, the numbers are vastly higher, though estimates on a global scale are even harder to make because neurocysticercosis is most common in poor places that lack good public-health systems. “Minimally there are 5 million cases of epilepsy from neurocysticercosis,” Nash says.

He puts a heavy emphasis on minimally. Even in developed nations, figuring out just how many people have the illness is difficult because it is easy to mistake the effects of a tapeworm for a variety of brain disorders. The clearest proof is the ghostly image of a cyst in a brain scan, along with the presence of antibodies against tapeworms.

The closer scientists look at the epidemiology of the disease, the worse it becomes. Nash and other neurocysticercosis experts have been traveling through Latin America with CT scanners and blood tests to survey populations. In one study in Peru, researchers found 37 percent of people showed signs of having been infected at some point. Earlier this spring, Nash and colleagues published a review of the scientific literature and concluded that somewhere between 11 million and 29 million people have neurocysticercosis in Latin America alone. Tapeworms are also common in other regions of the world, such as Africa and Asia. “Neurocysticercosis is a very important disease worldwide,” Nash says.

The alarming illness occurs when tapeworm larvae lose their way. Normally, Taenia solium has a life cycle that takes it from pigs to humans and back to pigs again. Adult tapeworms, living in the intestines of humans, produce up to 50,000 eggs apiece. The eggs are shed in the infected person’s feces. Pigs swallow these eggs accidentally as they rummage for food on the ground. When the parasite eggs reach a pig’s stomach, larvae hatch and burrow their way into the animal’s bloodstream. Eventually they end up lodged in small blood vessels, typically in the animal’s muscles. There they form cysts and wait until their host is eaten by a human. (Pork has to be undercooked for the tapeworms to complete their journey.)

But sometimes tapeworms take a wrong turn. Instead of going into a pig, the eggs end up in a human. This can occur if someone shedding tapeworm eggs contaminates food that other people then eat. When the egg hatches, the confused larva does not develop into an adult in the human’s intestines. Instead, it acts as it would inside a pig. It burrows into the person’s bloodstream and gets swept through the body. Often those parasites end up in the brain, where they form cysts.

The tapeworm larvae often get stuck in ventricles, or fluid-filled cavities, in the brain, sprouting grapelike extensions. In this way the worm actively cloaks itself from immune cells. Protected and well fed, its cysts can thrive there for years.

As a tapeworm cyst grows, it may push against a region of the brain and disrupt its function. It may get stuck in a passageway, damming the flow of cerebrospinal fluid. This impasse can cause hydrocephalus, or water on the brain, along with dangerously high pressure. A resulting brain hernia can result in stupor, coma, or death.

If a tapeworm cyst doesn’t cause big troubles, it may go unnoticed for its entire life. Eventually a tapeworm cyst that can’t move on to its adult stage will die; this signals the host’s immune system, eliciting a powerful attack and bringing its covert deception to an end. In many cases, the immune cells swiftly annihilate the revealed cyst, but often damage occurs. The immune system’s attack on the cyst can cause the surrounding brain tissue to swell with inflammation. For reasons unknown, a calcified cyst can keep triggering these immune reactions for years after the parasite’s death.

Although any cyst in a susceptible area of the brain can cause seizures, those lodged near regions that issue commands to muscles can trigger violent convulsions. One of Nash’s patients suffered from tapeworm cysts that twisted around his brain stem. After the tapeworms died, the inflammation that followed was so severe it put the man in a coma.

“Thirty or 40 years ago, these patients just died. Surgeons would go in and see this mess and couldn’t do much,” Nash says. Fortunately, the situation is improving. Even his comatose patient woke up and, after a few years of off-and-on treatment, completely recovered. “Now the guy is doing quite well.”

A great step forward came in the mid-1980s when praziquantel, the first drug able to kill tapeworm larvae in the brain, became widely available. But praziquantel proved too effective. It not only kills tapeworms but also triggers an immune reaction that causes brain swelling. “Paradoxically, we produce the disease we want to treat,” Nash says.

Over the years Nash and others refined the treatment by combining praziquantel with other drugs that tamp down the immune system. It is far from a perfect solution, though. Sometimes the immune system still overreacts, requiring years of care for seizures and other symptoms. And immune-suppressant drugs like steroids have side effects of their own.

The hunt for better drugs to fight neurocysticercosis is not an easy process. The best way to test potential medicines on tapeworms is to get living cysts out of infected pigs. Nash and his colleagues recently set up a lab in Peru, where infected pigs are abundant, to do just that.

Although finding a better cure is important, Nash is more interested in preventing tapeworms from getting into human brains in the first place by breaking their life cycle. A favored strategy is identifying people who have adult tapeworms in their bodies and giving them drugs to kill the parasites. It is also possible to vaccinate pigs so that they destroy tapeworm eggs as soon as they ingest them.

None of this is rocket science — which makes Nash all the more frustrated that so little is being done. “I see this as a disease that can be treated and prevented,” he says. But there are precious few resources available for treatment and little recognition of the problem. “All of this seems to be very feasible, but nobody wants to do anything about it.”