One Cure for Vertigo: Playing Pinball Inside Your Head.

By manipulating your head just so, a doctor can sometimes cure chronic dizziness. 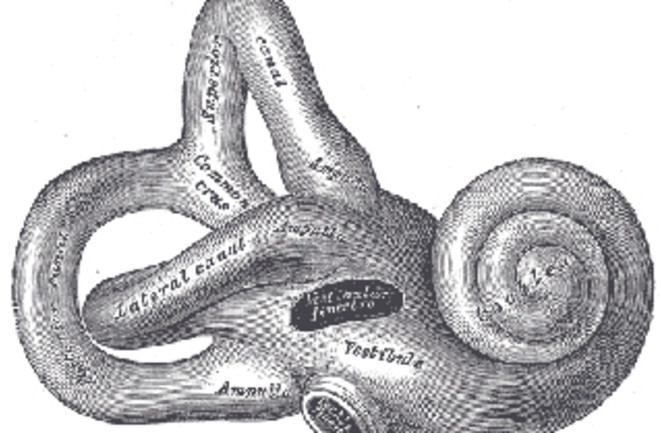 A lateral view of the right osseous labyrinth. | 20th U.S. edition of Gray's Anatomy of the Human Body

Thomas Riccio, a lanky 84-year-old, was dozing off in the waiting room. A former crane operator at a steel mill and a World War II veteran, he had been in for a physical six months earlier and everything was fine. His only chronic medical problem was high blood pressure.

When I called his name, he stood up and swayed, almost losing his balance. His wife and I lunged, each grabbing one of his arms.

“I’m OK, I’m OK,” he insisted. “Just when I get up sometimes, I almost lose my balance, but I haven’t fallen.”

His wife told me it was the fourth time in three months that he’d come to the VA clinic with dizziness. At our regular visits he always said that everything was good. He wasn’t one to complain.

Slowly we made our way down the hall, Mr. Riccio sliding one hand along the wall.

Dizziness is the third most common symptom in primary care, and it’s one that doctors love to hate. That is because each of the three main cate­gories of dizziness—vertigo, disequilibrium, and light-headedness—has its own lengthy list of diagnoses.

Vertigo is an illusory sensation of motion or spinning, often accompanied by nausea. It can be caused by inner-ear problems, mi­graines, or, if accompanied by other symp­toms, a stroke. Disequilibrium—which is particularly common in elderly patients with arthritis or problems with vision, hearing, or balance—is a feeling of unsteadiness while walking unaided across an open space. Light-headedness is the sensation of near fainting, such as one might experience when standing up suddenly after a day of gardening in the hot sun. It most often results from problems in blood flow to the brain caused by anemia, low blood sugar, hyperventilation, dehydration, or cardiac problems.

Which of these three was Mr. Riccio experiencing? I wasn’t the first doctor to consider the question. Mr. Riccio told me he had gone to the emergency room three months earlier, complaining of dizziness and headaches he’d had off and on for several days. Given the patient’s history of high blood pressure, the emergency room doctor suspected a stroke, so he asked for a CT scan of Mr. Riccio’s brain to see if there were any blocked or burst blood vessels. He also requested blood tests for signs of anemia or low blood sugar. The CT scan and the blood work both came back normal. Mr. Riccio was discharged with instructions to take Tylenol, in case he was experiencing a migraine. During the next three weeks, both the headache and the dizziness eased, but then the dizziness returned.

Over the next few months, he saw three more doctors. One ascribed the headache and dizziness to sinusitis. Another thought it could be inflammation of the inner ear. Another believed elevated blood pressure was the cause. Mr. Riccio tried various treatments to no avail.

Now it was my chance to solve the puzzle.

“It comes and goes,” Mr. Riccio told me. “Last night in bed, I thought I was going to pass out. The room suddenly whizzed around. Just for about 10 seconds, but it felt a lot longer.”

Did it happen more if he turned his head to one side or the other?

He thought for a moment. “To the right,” he said. “When I turn my head to the right fast, I get dizzy.”

“When you stood up in the waiting room, you looked pretty dizzy,” I said. “When you stand up fast, do you usually get kind of light-headed, like you’re going to faint?”

What happened when he walked across a large open space? Did he feel unsteady? He said that he didn’t.

I asked Mr. Riccio to follow my forefinger with his eyes. A jerking in his eye movements when he tracked my finger could indicate a problem with the balancing system of the inner ear. The other doctors hadn’t noted any rhythmic jerkiness, called nystagmus, but I wanted to double-check. I repeated the test a couple of times. Mr. Riccio’s eye movements were smooth.

Sometimes the information we get from a patient’s history doesn’t match up with the physical, and we have to go with our gut feeling. My gut was telling me that this was vertigo, even without nystagmus. Could it be benign paroxysmal positional vertigo (BPPV)? This is the most common type of positional vertigo, and it occurs most frequently in the elderly. In almost half of all cases, there is no known cause.

There is one leading hypothesis about how it happens. Inside the inner ear are three fluid-filled, semicircular canals that serve as balance sensors. In patients with BPPV, tiny chunks of calcium carbonate crystals, called otoconia, float into the canals. The crystals are normally attached to a membrane in the inner ear, but they can be dislodged, perhaps by head injury or infection or through the normal degeneration of aging.

“You know those little handheld pinball games?” I asked. Mr. Riccio nodded. “The crystals are like the tiny metal balls in one of those games. Once they’re in the wrong spot, it’s hard to get them back. They roll around every time you move your head and unintentionally set off motion sensors. So your brain gets the wrong information about balance. It thinks you’re moving in one direction when you’re really not. So it overcorrects, and you end up with the spinning sensation.”

He leaned forward and pursed his lips.

“Is there another pill to try?” He sounded tired, a little frustrated.

In 1983, John Epley, an otolaryngologist in Portland, Oregon, found that a precise series of guided head movements could rid patients of vertigo by directing the disruptive crystals out of the semicircular canals. Initially the local medical community dismissed his finding. To many physicians, any technique based on a maneuver or manipulation smacks of hocus-pocus. But the treatment was backed up by scientific studies, and by 1992 doctors had come to accept it.

The Epley maneuver is now the standard treatment for BPPV. Because it involves manipulating the head and neck into certain positions, in rare instances it is not recommended for patients with unstable heart disease, severe blockage of the carotid arteries, or neck disease. Otherwise the maneuver is safe and quite effective, re­lieving vertigo in 80 percent of patients with BPPV.

It was worth a try.

I asked Mr. Riccio to sit on the exam table again. I explained that we needed to position him so he was lying on his back with his head hanging to one side and gently tilted backward. I warned him that the changes in position would momentarily trigger the dizziness, if my suspicion about the cause of his vertigo was correct.

Standing at his side, I said, “Hold my right forearm,” as I braced my left hand on his back. “Now turn your head to the right and keep it turned as you lie down.” I guided him down until he was flat on his back, his head tilted back over the edge, his right ear pointing at the floor.

“Whoa, there it goes,” he said, opening his eyes wide. “That’s the feeling. That’s the one.” As I moved his head into the different positions, I pictured a little pinball game and imagined I was directing the tiny balls—the crystals—back into their designated holes.

After 30 seconds I turned his head gently so his left ear was pointing down. Then I instructed him to keep his head still and to roll over onto his left shoulder, keeping his head angled down to the exam table. Another 30 seconds.

“Now please sit up without changing the position of your head and tell me if you still feel dizzy.” I helped him up.

“Oh yeah, very dizzy.” He braced himself, clutching the edge of the exam table.

We repeated the whole sequence two more times, and by the last time Mr. Riccio sat up, the dizziness was gone. It might come back, I told him, but it would probably be less intense. I printed a diagram showing how he could do a modified version of the Epley maneuver at home, using a pillow under the shoulders to position his head at the correct angle. If he did this a few times a day until the dizziness was gone for 24 hours, it would probably stay away for a while, and in some cases for good.

Two months later he was back for his regular checkup. We walked briskly from the waiting room to my office. He was beaming.

Just call me a pinball wizard.

Anna Reisman is an internist in Woodbridge, Connecticut. The cases described in Vital Signs are real, but names and certain details have been changed.