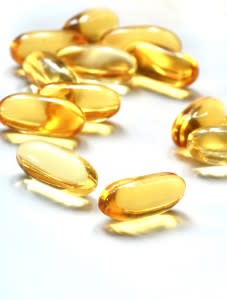 The anti-inflammatory effect of fish and fish oil supplements have long been used to bring down high blood pressure and keep heart disease at bay. The secret ingredient is their omega-3 fatty acids. A new study shows that omega-3 may be good for your skin, too. Most skin cancer is the result of exposure to ultraviolet radiation from the sun, which suppresses the skin's immune system making people less able to fight off skin diseases such as cancer. But researchers in England have shown that a daily dose of omega-3 can partially counteract this effect, reducing an individual's likelihood of developing skin cancer. The fatty acids have been shown to prevent cancer in mice, but this was the first time it was demonstrated in humans. The researchers recruited volunteers with a nickel allergy, whose skin produced a red rash on contact with the metal. Over the course of twelve weeks, researchers gave the participants a daily supplement that contained 4 grams of omega-3---about the same amount found in 1.5 portions of oily fish. Participants were then exposed to the equivalent of 8, 15 or 30 minutes of midday sun in northern England. To determine how much their immune systems were suppressed by the UV rays, researchers put a nickel-based ointment on participants' skin and compared the resulting rash with a known index of immune response. Nickel allergies are a common affliction and so have become a pretty typical way of measuring immune response. For the two shortest exposure times, people taking fish oil only had half as much immune suppression as people who weren't taking supplements. Very little improvement was seen in members of the 30-minute exposure group, according to the report published in the March issue of The American Journal of Clinical Nutrition. Researchers concluded that omega-3 appears to protect people against short-term exposure to UV rays, and that the mechanism, although still unclear, occurs at the cellular level. The fatty acid's role is chemopreventative, meaning it prevents or slows the development of cancer. Over the course of a lifetime, the researchers say, such continuous, low level protection could have a substantial benefit for individuals and the population at large. For the sake of heart and skin health, then, eat your fish. Image courtesy of aodaodaodaod/Shutterstock