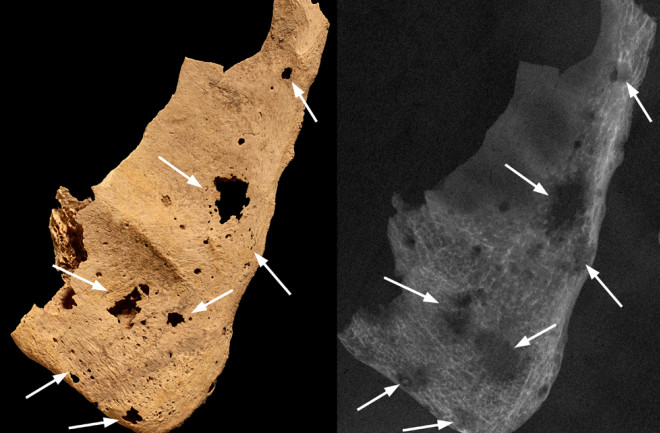 Lesions in the right scapula of a 3,200-year-old skeleton indicate the presence of cancer. Credit: Trustees of the British Museum We tend to think of cancer as a modern disease, a result of our unhealthy lifestyles, environment and our sheer longevity. But it appears ancient humans weren't unfamiliar with the disease. British researchers recently uncovered the oldest example of human cancer in a 3,200-year-old male skeleton. The skeleton was found last year at an archeological site in northern Sudan. Researchers estimate that the man was 25 to 35 years old at the time of death, and was laid to rest in 1200 B.C. Their analysis of the skeleton has since revealed evidence of metastatic carcinoma throughout the body. Metastatic carcinoma is a type of cancer that originates in epithelial tissue and has spread to other parts of the body. This is the oldest complete skeleton of a human displaying metastatic cancer. Scientists have previously discovered several older examples of cancer in skeletal fragments, but there are doubts regarding diagnosis in these specimens, the researchers say. The finding could help researchers learn more about the underlying causes of cancer in ancient populations, and could shed light on the evolution of the disease.

The skeleton of the adult male excavated from Sudan. Courtesy: Trustees of the British Museum Researchers detected small bone lesions in the man’s skeleton using radiography and a scanning electron microscope. Based on the shape of the lesions, they determined the only likely cause was a malignant soft-tissue tumor. Imaging of the skeleton showed tumors on the man’s collarbone, upper arms, shoulder blades and several other locations throughout the body. The researchers published their findings Monday in the journal PLOS One. The exact origin of the cancer is impossible to determine, researchers said in a news release. Further, the cause of the man’s cancer is purely speculative, but researchers posit two possible explanations. First, carcinogenic effects of smoke are well known, and ancient houses in that region of Sudan featured hearths and bread ovens in small, poorly ventilated spaces. It’s possible that long-term exposure to smoke doomed the young man. Researchers also cited infectious disease as a plausible cause for the man’s cancer. Some infections can lead to cancer, and an infection called schistosomiasis has plagued inhabitants of that region since at least 1500 B.C. Schistosomiasis is a disease caused by parasitic worms that affects the urinary tract or intestines. The disease is now recognized as a common cause of bladder cancer.

An ancient Egyptian medical text, called the Edwin Smyth Papyrus, dates back to 1600 B.C. and is widely believed to contain the earliest known reference to a cancerous tumor. There’s evidence of cancer in roughly 200 individuals in the human fossil record, which seems like a very small number. It’s led to speculation that the disease didn’t ravage ancient peoples like it does modern ones. But although archaeological evidence is rare, it doesn’t mean cancer was nonexistent in ancient times, as George Johnson explained in a recent Discover article:

Except for a few rare cases in mummies, only bone tumors will be found — those originating in skeletal tissue or spreading there from other sites. These count for only a small fraction of all cancers. About 90 percent are carcinomas, tumors forming in the epithelial tissues that line the organs and cavities of the body and form the skin.

Even when cancer digs into the bones, Johnson said, the telltale lesions might not survive the test of time. Thus, we could be underestimating the rates of cancer in early civilizations. When you factor out carcinogens in cigarettes, processed food, chemical factories and poor diets that bombard us today, the baseline cancer rate is probably similar to what it was thousands of years ago, Johnson wrote.