Older Dads Give Good Telomeres, But Longevity? Not So Much

Sophie Bushwick (Twitter, Tumblr) is a science journalist and podcaster, and is currently an intern at DISCOVERmagazine.com. She has written for

Scientific American, io9, and DISCOVER, and has produced podcasts for 60-Second Science and Physics Central. 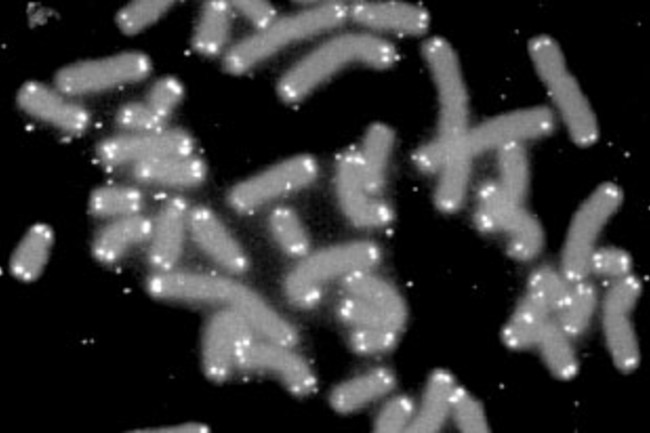 , “Telomeres just grabbed me and kept leading me on.” And lead her on they did---all the way to the Nobel Prize in Medicine in 2009

. Telomeres are DNA sequences that continue to fascinate researchers and the public, partially because people with longer telomeres

tend to live longer. So the recent finding that older men father offspring with unusually lengthy telomeres sounds like great news. Men of advanced age will give their children the gift of longer lives---right? But as is so often the case in biology, things aren't that simple, and having an old father may not be an easy route to a long and healthy life. Every time a piece of DNA gets copied, it can end up with errors in its sequence, or mutations. One of the most frequent changes is losing scraps of information from each end of the strand. Luckily, these strands are capped with telomeres, repeating sequences that do not code for any proteins and serve only to protect the rest of the DNA. Each time the DNA makes a copy, its telomeres get shorter, until these protective ends wear away to nothing. Without telomeres, the DNA cannot make any more copies, and the cell containing it will die. But sperm are not subject to this telomere-shortening effect. In fact, the telomeres in sperm-producing stem cells not only resist degrading, they actually grow. This may be thanks to a high concentration of the telomere-repairing enzyme telomerase in the testicles; researchers are still uncertain. All they know is that the older the man, the longer the telomeres in his sperm will be. And a recent study

] of historical data on longevity have found that older fathers, particularly those who reproduce beyond the age of 65, are actually associated with a shorter lifespan for their children, especially their daughters. Middle-aged offspring of men in the oldest age group were 60 percent more likely to die than the progeny of younger men. The children of older dads are also more likely to have lower IQs

and suffer from leukemia, bipolar disorder

. Why aren’t the longer telomeres granting them longer, better lives?

The issue is that sperm cells aren’t only gaining telomere length---they’re also picking up more mutations. Unlike women, whose eggs are generally created all at once, while a female is still in utero

, men produce sperm throughout their lives. And every time a sperm stem cell begins the process of spawning new sperm, it has to divide, creating the opportunity for mutations to form. The sperm produced by older sperm stem cells will have longer telomeres, but they will also have a greater load of mutations, which tends to shorten offspring lifespan. So the question is: Between telomere length and mutation load, which one dominates the offspring’s chances of a long life? Because studies of historical data found that offspring of older fathers die earlier, you might think that the mutation load wins. But this may not be entirely correct. First of all, fathers’ ages are far from the only contributors to their offspring's health. For example, data for these longevity studies was collected in the 1800s and 1900s, before reliable birth control. Fathers often had many children before middle age, which means the offspring of older fathers were likely to have many siblings. The tenth child of an older father would receive less attention, fewer resources, and perhaps less of an opportunity for long life than, say, an only child born today whose parents chose to wait a while before reproducing. Social factors and available resources play a big part in a child’s lifespan. In contrast with the studies that used historical data, a 2009 study of modern elderly Canadians

found no connection between the seniors’ likelihood of dying and their parents’ ages. However, this study only looked at the offspring of men between the ages of 25 and 45. It may be that the adverse effect of genetic mutations on offspring longevity only becomes important for men over a certain age. After all, one of the historical studies found the effect to be much more significant in the oldest age group: men who reproduced after the age of 65. This suggests there may be a sweet spot, a paternal age that maximizes telomere length while minimizing mutations, that would be an ideal time for reproduction---at least, in terms of genetic quality. But even if there is a slight advantage to having middle-aged but not old fathers, it's not likely to be a big advantage, or we would see some positive effect in longevity data. Ultimately, telomeres and mutations don’t determine exactly how or when we die. These genetic factors shape our lives, but they don't control our destinies.