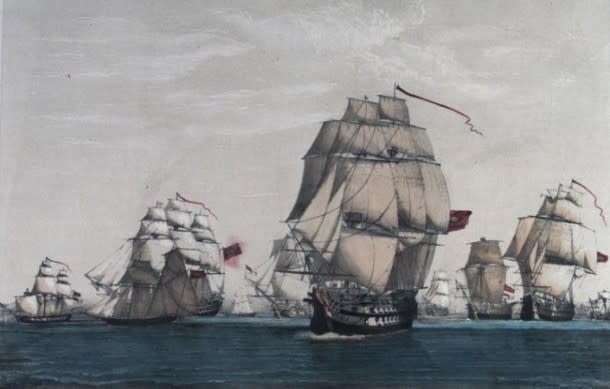 You are what you eat---that's true even after your bones have spent 200 years buried in the dirt. A new study using old bones from 18th century British sailors confirmed the naval diet: lots of biscuits, more protein than the average landlubber, and the same damn things sailors ate for the previous 200 years. The Victualing Board actually kept meticulous records of a sailor's official rations: 1 lb of bread and 1 gallon of beer per day (!), plus 1 lb of pork twice a week, 2 lbs of beef twice a week, or butter and cheese the other three days. But when the going got tough out in the middle of watery nowhere, did sailors actually get their rations? Yes, it seems, based on an analysis of nitrogen isotopes extracted from the bones of 80 sailors. The elevated levels of nitrogen suggested that sailors did get as much beef and pork as the Victualing Board recorded. And despite being at sea, they didn't seem to eat much fish. Carbon isotopes also provided a striking record of an individual sailor's journey. Some of the sailors' bones had levels of carbon-13 indicating they ate plants that made sugars through a pathway called C4, and these plants such as maize and sugar cane are not found in northern Europe. The researchers also compared carbon isotopes from teeth, which are fixed in childhood, and bones, which change through your lifetime. High variability in carbon isotopes among sailors' teeth suggested they came from all over the British Empire before they became sailors. Comparing the bones of these 18th century sailors with bones excavated from the Mary Rose that shipwrecked in 1545, the researchers determined the diets of seamen likely did not change much in the two intervening centuries. For a major dietary change, the sailors would have to wait several decades for the invention of canned food. [via History.com]