Oh No! No Fresh Salsa Due to Salmonella Outbreak 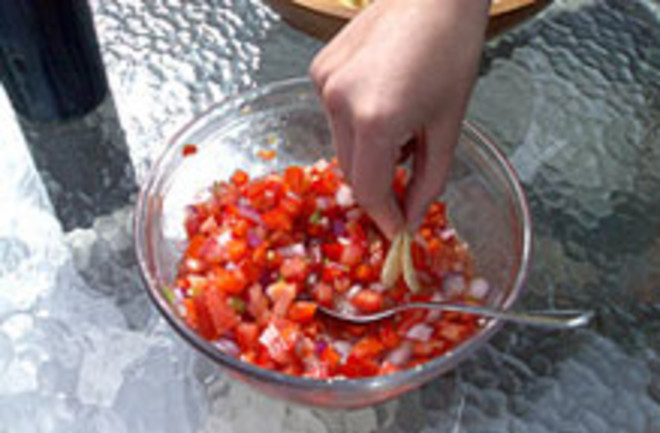 The slow-rolling salmonella outbreak in several states has finally got health officials seriously alarmed. Today the FDA asked New Mexico and Texas grocery stores, restaurants, hospitals and schools to stop selling and serving the tomatoes that are thought to carry the salmonella bacteria. Too bad there's not a parallel outbreak of bad comedy, because somewhere in the Southwest right now, hundreds of thousands of tomatoes are rotting. The FDA singled out raw red plum, Roma and round red tomatoes as the possible culprits, and also reminded consumers to stay away from fresh salsa made with tomatoes. The agency also issued recommendations that sound not only sensible, but a bit tastier.

[C]onsumers in New Mexico and Texas should limit their tomato consumption to tomatoes that have not been implicated in the outbreak. These include cherry tomatoes, grape tomatoes, tomatoes sold with the vine still attached, and tomatoes grown at home [FDA].

Some businesses are taking voluntary measures to protect their customers, like the Texas-based Whole Foods grocery chain, which pulled all tomatoes without attached vines or stems from the shelves of its 270 stores, and stopped using the chancy tomatoes in salads and sandwiches. Cases of this salmonella strain have been reported since mid-April, with the FDA counting over 57 cases with 17 hospitalizations in New Mexico and Texas, the states hardest hit. Seven other states in the Midwest and West have also reported cases, from Illinois to Idaho. Symptoms include diarrhea, fever and intestinal cramps, and while none of that is pleasant, the Centers for Disease Control points out that most people get better without treatment. By looking at the genetic fingerprint of the bacteria, CDC officials determined that all of the patients in this outbreak caught the same rare salmonella strain, a type called Saintpaul, suggesting that the tomatoes may have been tainted at one farm or processing plant before being distributed all over the country.