Offense in a globalized world

In my post "The naked years" I used this image to illustrate the transition from furry Australopithecus, to hairless H. erectus, to the sartorially elaborated H. sapiens sapiens: 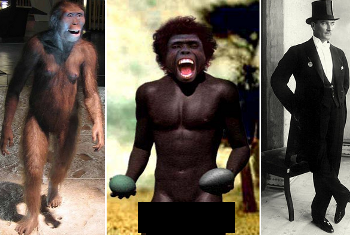 Do you find the image offensive? I obviously didn't, I'm not an artist and was trying to visually communicate a scientific concept, not "provoke." My usual procedure when looking for images is to go to Wikipedia and find material in the public domain. For the last image I just entered "top hat," and yanked out the first picture which had a fully body shot, and inserted it into the image montage. As I was crediting I noticed that the image was of Mustafa Kemal Atatürk, the George Washington, Andrew Jackson, Abraham Lincoln of Turkey rolled into one. And so the post went up.... But that's not the end of the story. Someone posted the entry on friendfeed, which prompted this response:

Eivind, looks like Ali intended to tell about Turkish people's commitment to the image of Ataturk. Initial reason for the Turkish censorship of Youtube was "insulting to Ataturk" From that point of view, putting an image of the man next to a chimpanzee is humiliating, even if it is out of the context.

First, the image isn't a chimpanzee. Atatürk is next to another human, albeit an ancestral lineage. The commenters seem to have spoken more in jest, but Turks take insults to the founder of their nation seriously : "...the Turkish Parliament issued a law (5816) outlawing insults to his reminiscence (Turkish: Hatırası) or destruction of objects representing him." As a larger proportion of Turks are Creationists than Americans, I can see where they'd find offense at this juxtaposition (though the Creationist ones might be less adulatory of Atatürk, who was a militant secularist, and privately an atheist). I have not removed the image. Unless the editors ask, I will not I suspect, though I am always open to new arguments assuming I have the marginal time to consider them. I think the idea that this is an offensive image is silly.

And the intent was to contrast the well dressed modern man with our naked ancestors. But, I can also agree that Turks are within rights to be offended. They aren't me, and I'm not them, our experiences and values differ. How about this image: 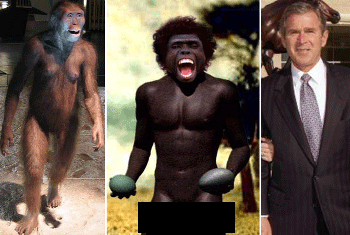 I don't personally find it offensive, but I wouldn't use it. Depicting George W. Bush in a simian fashion was so common on the political Left during his tenure that it wouldn't serve the intentions of the post, which is to explore science, not political ridicule or satire. Conservatives would be offended, liberals would be amused, and the topic would probably be the image, and not the post. How about this? 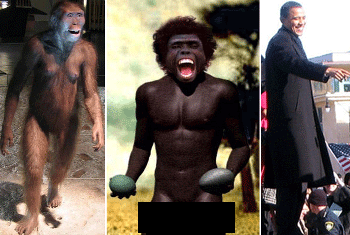 I wouldn't put this image up either as an illustration. I don't personally find it offensive in a visceral sense, Barack H. Obama is descended from ancient primates who we might term "apes." But, I am sensitive to the long history in the United States of depicting people of African ancestry as apes or ape-like, and such an image might cause great offense and hurt others. At a minimum the image would be a distraction, just as the image with George W. Bush spliced in would be. And that is why I can understand the Turkish perspective somewhat. The post-modern rejection of the pretense of concrete objectivity is valid in some circumstances, though that rejection is itself grounded in material, and the phenomenon which emerges from that material (brain and mind). But, that does not mean that I fly to total subjectivity here. To my knowledge Turks have not historically been depicted as apes. If I used "Orientalist" imagery to indicate the progression from barbaric Turk, to decadent Ottoman, to vigorous Turk, some analogy might be drawn between the first and last image of H. sapiens sapiens. So though I grant some Turks the right to be offended (even on the thread very few Turks seem offended at the use of the image), in this case I think there are objective grounds to also argue that the offense taken is not proportionate to the image because of the context. But setting aside the issues of objectivity, why don't I take the subjective aspect which I grant seriously enough to change the image (at least at this moment?). In this instance, no one is forcing Turks to view the image. But there is a more general problem: the non-uniformity of the sacred and the response of offense cross-culturally. Different cultures have radically different views of what is offensive, what is sacred, and often those views are simply at such opposition that a common understanding is not possible. Many Jews view the traditional Christian view of supersessionism as deeply offensive and objectionable. Many Hindus view the stance of many Muslims and Christians that they should convert "heathens", "idolators" and "pagans" as deeply offensive. And yet for some Christians and Muslims to engage in the Great Commission or Dawah is a fundamental part of their religious faith. In the realm of practice, many conservative Muslims find the exposure of female arms and legs a provocation. Conversely, many women across the world feel that it is their right to dress how they wish to, and are offended at the idea that their very body is a provocation, such that it needs be cloaked. I could go on. And, I have to add that the

The same people can view the same images, or consider the same beliefs, and come to radically different conclusions as to their acceptability as judged by "common decency." There's no easy solution to this problem, but, we need to remember that other people don't always share our implicit values, experiences and outlooks, and so we shouldn't view their own actions and views as we would our own in those circumstances. I'm aware of this personally because my milieu is that of secular liberals, and I am a secular conservative. I don't go into situations assuming people share my values, because they don't, and I tread in a manner which pragmatically acknowledges that reality of my existence. This is a weblog written by an American, predominantly for an American audience. Additionally, though it is a politically diverse weblog, the readership is overwhelmingly well educated and secular. That colors what I say, how I say it, and how I assume the audience will react (I doubt most of you recognized the image as of Atatürk. Even I did not think of it, and I take interest in things Turkish!). But many people find aspects of my posts deeply offensive. Generally they deal with human genetics and tread on some nationalistic shibboleth. I don't often publish those comments or respond to those reactions because I don't think there's any fruit to be had there. If I changed what I wrote to satisfy all those who were offended I just wouldn't write very much. The internet is international, but for purposes of practicality I have to constrain the circle of offense to the United States, and to a lesser extent the Western world. As I suggested above, many people are offended by contradictory things, so ultimately the set of things mentionable converges on the null set if you really try to satisfy everyone. A reasonable human life is bounded by a common set of values, understandings, and cultural moorings. I'm not a dogmatist of course. But I reject the idea that comparison of an individual to a chimpanzee is offensive in and of itself. Chimpanzees are intelligent and interesting animals, as are we. Those are my values, and in my space (or the space that the editors of Discover Magazine provide) they will reign supreme. I can not live under the worry that someone, somewhere, may be offended. I wrote this post in part to clarify this particular issue, but also obliquely to address events in the wider world of cross-cultural offense. People are taking sides, and arguing in broad brushes. That's fine for politicians and public figures, who live in a different world. Most of you who know me understand that I take a dim view of the median human cognitive capacity, so I have little hope that a subtle and nuanced discussion can be had out in the open in a broad-based fashion (that assertion, that the average human is not very intelligent, is very offensive to many people, but that is just how I feel, and I own it). But those of us who deal in the domain of the mind should push ourselves further, and try to acknowledge both that we're active agents within a particular cultural system and hold to specific values, and, that we can use our higher cognitive faculties and enter into a state of Epochè, and view phenomena from the outside.