Not all homozygosity is created the same (way) 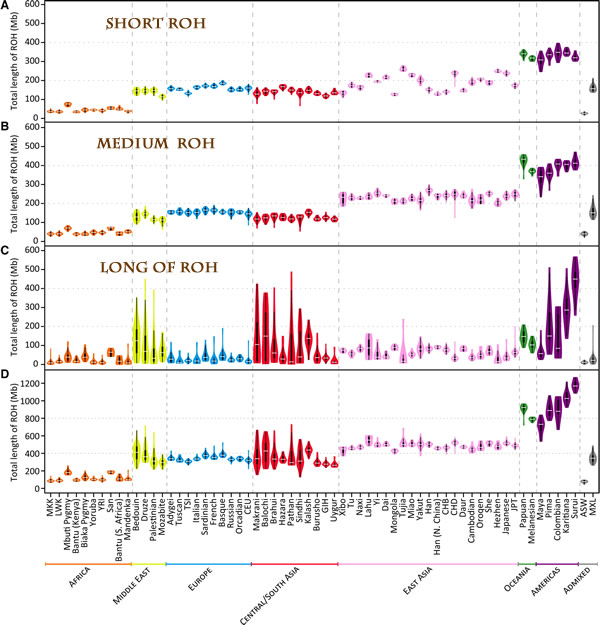 Browsing the most recent issue of The American Journal of Human Genetics I stumbled upon a paper with some neat figures, Genomic Patterns of Homozygosity in Worldwide Human Populations. More specifically they focused on patterns of "runs of homozygosity" (ROH), that is, sequences of the genome which exhibited a strong bias toward homozygous SNPs. The figure above illustrates a pooled set of populations with individual variation in total length of ROH for aggregated from three classes, short, medium, and long ROHs. The small and medium length ROH exhibit the pattern of increasing total ROH as a function of distance from Africa. But not so with the large ROH. Why? The figure below graphically illustrates what's going on. Long ROH is found in Middle Eastern and South Asian populations with attested cultural patterns of inbreeding, as well as South American groups with very small effective population sizes. Short and medium runs are correlated with each other, because they are simply different quantitative manifestations of the same process in terms of generating ROH (e.g., bottlenecks, smaller effective population, etc.). In contrast, long ROH is due to the radical cranking down of effective population size which occurs during inbreeding. 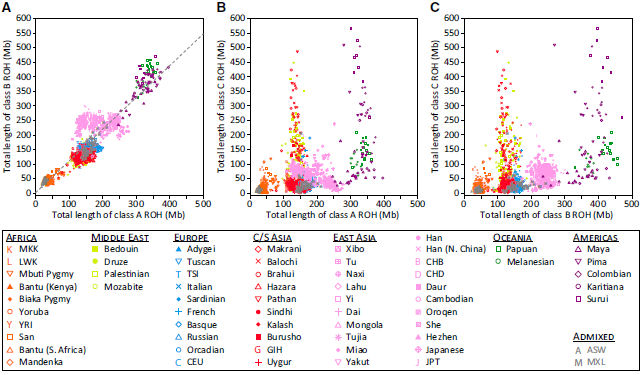