Non-zero sum transitions in the human past

A few people have pointed me to the recent paper in Science, Tenfold Population Increase in Western Europe at the Neandertal–to–Modern Human Transition. The basic result is obvious, and not totally revolutionary: anatomically modern humans may simply have demographically absorbed the Neandertals (the word "absorbed" has many connotations here obviously). The results are clear in this figure: 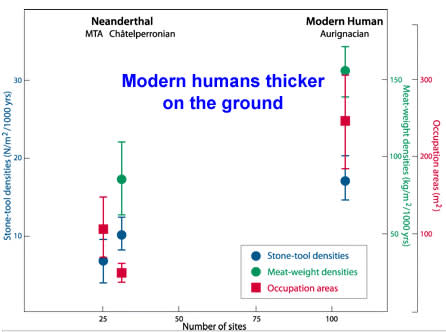 This is not surprising, even though I have only a glancing familiarity with the guts of paleontology I was aware that there's a lot of inferential evidence that Neandertals were not as efficient at extracting resources from any given piece of territory as modern humans. In The Dawn of Human Culture the paleoanthropologist Richard Klein offered a straightforward biological explanation for why and how the neo-African populations so rapidly marginalized Neandertals: some sort of macromutation which allowed for language and so the protean flexibility of human culture. Implicitly this was the conventional wisdom until the likelihood of Neandertal admixture was discovered, and earlier the fact that Neandertals seemed to share the derived FOXP2 variant (the "language gene"). The earlier inferences of human demography using mtDNA, and later ancient DNA extractions from mtDNA, also seemed to align well with the proposition that there was a clean replacement of Neandertals across their range by modern populations (and the Y and autosomal results were supportive of this model too). In hindsight it may be that these earlier genetic methodologies simply lacked the power to smoke out low levels of autosomal admixture on the scale of a few percent. Uniparental lineages have a tendency to fluctuate and go extinct fast, so the lack of the Neandertal lineages in modern populations may be a specific instance of a broader tendency whereby the vast majority of ancient lines of ancestry are extinguished. So what smoking gun did the neo-Africans have which allowed them to be fruitful and multiply? The demographic assimilation by massive numbers is clear all across the world; there's a reason that the "Out of Africa" model has found broad support in both morphology and genetics. Not only did the neo-Africans swarm over the northern and eastern landscapes dominated by other hominin lineages, but they were moving into the territory of others. This is quite the mean feat. But today I think we need to revisit both the idea that Neandertals were qualitatively differently from us in a deep species-level sense, and that there need be one smoking gun to explain it all. That's because I think we have many cases of more recent replacements and assimilations on the scale of that of the Neandertals. In the New World Europeans and Africans have replaced and assimilated the indigenous population in many regions which were ecologically suitable. In places like the Dominican Republic indigenous ancestry does persist at low levels, especially in the mtDNA, but it is not longer salient or culturally relevant in a concrete (as opposed to symbolic) sense. There were major biological differences between these Old World populations and the indigenous ones, mostly having to do with susceptibility to disease. Still, we can not separate biological advantages of the new populations from their cultural context. Malaria resistance amongst Africans became prevalent only with the rise of agriculture, as broad swaths of wilderness were cleared and transformed into farmland which was a superior environment for the mosquitoes which transmitted the pathogen. Similarly, the various infectious agents to which Europeans were inured spread via long distance contacts, which could exhibit a scale in Eurasia unmatched in the New World thanks to the emergence of a genuine ecumene. The Columbian Exchange looms large in part because it is well documented and concerns Europeans, but genetic, linguistic, and archaeological data from Southeast Asia strongly implies that the ancient hunter-gatherers of both the mainland and the maritime zones have been assimilated by successive waves of agriculturalists issuing from the margins of southern China. There is also now evidence of massive population shifts in Europe and India due to the spread of agriculturalists. If an alien archaeologist examined the data I do think they might posit that were a biological speciation events which might explain this, as new traits arose which allowed the farming population to expand and replace the hunter-gatherers. Some of this is actually straightforwardly plausible. Consider the spread of lactase persistence or the ability of farming populations to digest amylose. But neither should we ignore the possibility of biobehavioral changes over time. Last year reading about the cultural history of Australian Aborigines I was struck by accounts of missionaries as to the different experiences in Polynesia, Melanesia, and Australia. In the two earlier cases the common strategy had been to convert "big men," which immediately brought over whole populations. This simply did not yield in Australia, where missionaries had to target on a much finer-grain, as members of an individual band were just as liable to assume that their leader had gone crazy if he converted to Christianity than not. The leaders of these bands did not have the social capital to enforce group level cultural change. In contrast the populations of Polynesia and Melanesia had very different structures and organizations for thousands of years (e.g., agriculture) which were much more top-down than those of Australia. And it may be that not only did deeply embedded values differ, but the average personality profile may have shifted due to cultural selection upon the extant standing variation in the trait. If there was a great leap forward to behavioral modernity ~40,000 years ago, then I think one should logically assert that there was another "great leap forward" ~10,000 years ago in the Middle East with the first farmers. There was also another "great leap forward" ~5,000 years ago ago with the invention of writing. There was another "great leap forward" ~300 years ago in Western Europea with the crystallization of a genuine scientific community. I'm not actually suggesting that what happened 10,000 years ago was a speciation event. What I'm suggesting is that the near past may be more similar to the distant past than we imagine. This makes the near past more exotic, and the distant past less exotic.

Planet EarthThe Ancient History of Board Games
Recommendations From Our Store