No-Sh*t Study of the Day: Lincoln May Have Had Facial Defect 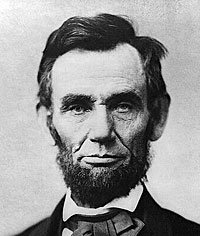 Lincoln, elated, at his first inauguration

"Lincoln may have had facial defect"

Honest Abe may well have been a great president and great man, but a handsome man he was not

: "Fancy a man 6 feet high and thin out of proportion.....with a long scraggy neck, and a chest too narrow for the great arms at his side. Add to this figure a head, coconut shaped and somewhat too small for such a stature... a face furrowed, wrinkled and indented as though it had been scarred by vitriol... a few irregular blotches of black, bristly hair in the place where beard and whiskers out [sic] to grow... and a nose and ears which have been taken by mistake from a head of twice the size." Anywho, laser scans of plaster casts of his face show that "the left side of Lincoln's face was much smaller than the right, an aberration called cranial facial microsomia," and that condition may have caused his left eye to occasionally drift "upward independently of his right eye, a condition now termed strabismus." And if you think that's all he had to wrestle with (he was in fact a good wrestler