Scientists are still working to fully understand what causes night terrors and how to stop them. 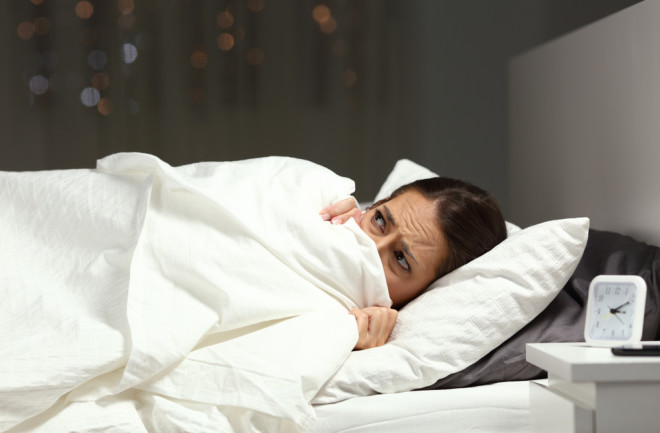 As the ceiling began crashing down around me, I reached for the hand beckoning me from above. I screamed as I attempted to grasp my rescuer's too-distant fingertips, afraid I would be buried alive.

When my roommates woke me, my heart was still beating rapidly as I gripped the center beam of the cabin we were sharing, my body hanging maybe two feet off the floor. It was the summer of 2009 and we were at Yosemite for a family reunion — a family I would marry into several years later. I was sharing the space with two other young women I didn't know well and making a terrific impression.

As I hung from the ceiling, one of them held my waist while the other turned on the light. As everything slid back into focus, I knew, instantly, I wasn't in any danger. Embarrassed from my late-night theatrical display, I dropped off the beam and scurried back to bed.

The three of us erupted into laughter from the shock of it all.

Experts may disagree on exactly what I experienced, but I have always referred to these sorts of episodes as night terrors.

Terrors of the Night

More than just a nightmare, night terrors are marked by intense panic. The sufferer will often scream and flail about for a period lasting from a few minutes up to an hour, often startling the people around them.

The episodes are more common in children, but an estimated 2 percent of the adult population is afflicted as well. I have experienced night terrors (or something similar) my entire life, though they are usually not as dramatic as my cabin episode.

After retelling this particular event to California-based sleep physician Kimberly Truong, however, she told me my experience didn't quite fit the night terror definition. “What you're describing kind of blends into two different things,” she says.

In a classic night terror, the sufferer doesn't typically remember a dream associated with their actions, she explains. Also, aside from some flailing, night terror sufferers tend to stay put. “More complex behaviors — the climbing — actually leaks into the parasomnia world,” Truong says.

Parasomnias are defined as disorders that cause unusual behaviors during sleep. They include night terrors, but sleep walking, sleep talking, sleep eating and even sleep sex are all different forms of parasomnias, too.

Sleeping Soundly — Or Not

Night terrors are known to occur in a stage of sleep known as N3. This is a deep, dreamless sleep that takes place roughly half an hour to an hour after a person falls asleep. This stage of sleep is repeated through the night — but the longest period happens during the first sleep cycle, which is why most night terrors occur in the first half of the night. Children are also known to have more N3 stages, which is why night terrors are more common in youth.

From studying brain waves during sleep, doctors know adults who suffer night terrors are experiencing “micro-awakenings” in two sections of the brain, Truong says. One section is the motor cortex, which is responsible for movement; the cingulate cortex, which helps regulate emotions, is the other.

These little arousals are caused by a variety of factors, from breathing disorders — namely sleep apnea — to psychological issues like anxiety. Alcohol and other drugs are known to play a role, too.

Sleep deprivation can also bring on a night terror, because when the body is overtired it will dip into a replenishing N3 stage quicker and stay there longer, Truong notes.

Although certain night terror triggers have been identified, there is still so much that has yet to be understood — like the best treatment options and why, for some, they even extend into adulthood.

It's a source of frustration but also one of intrigue for those studying them. “There's not a lot in medicine these days where we're still learning a whole lot,” Truong says. “We know so much about the heart; we know so much about the brain [and] the lungs on a cellular level. But sleep is actually still a big mystery and I find that really fascinating.”

Because night terrors are uncommon in adulthood, there can be a stigma attached to them. Minnesota resident Shavaughn Ulven is looking to change that. “My friends make jokes or say 'Oh, it's just a nightmare,' or 'You're growing up, you'll get over it,' ” Ulven says.

Ulven, 31, has lived with regular night terrors her entire life — experiencing them an average of four nights per week. Typically, they manifest as the classic sit-up-in-bed-and-scream variety. But they can get more involved, too.

In one of those more memorable episodes, Ulven broke her nose.

“I just ran out of bed, out of the bedroom and instead of hurtling down a hallway, I ran straight into a wall,” she said. “I literally had to wake up my daughter and bring her to the emergency room so I could get my nose set.”

Ulven herself has been on a variety of doctor-prescribed treatments and therapies for her night terrors, but they haven't gone away. In addition, sleep studies always come up normal because she never manages to experience a night terror when she takes the test. Today, she copes by sleeping with a small light on so she can orient herself more quickly. Her doctors have told her to stay away from medication unless she injures herself again or someone else.

Even with all that we don't know, however, Truong and Ulven both urge sufferers to see a doctor about their parasomnias — especially if they're putting themselves in danger.

“Some people are waking up in the woods and not even knowing how they got there,” Ulven says. “This can be a very serious condition and this can lead to unwanted injuries. This can lead to death.”