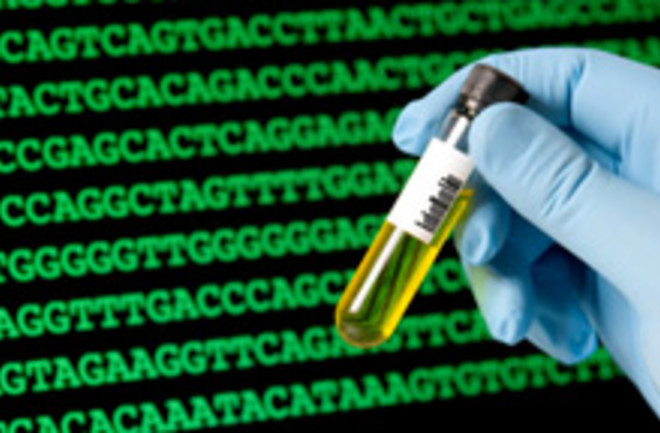 A major new lawsuit is challenging the notion that human genes can be patented just like the latest mousetrap built by a basement inventor. The case focuses on two genes, BRCA1 and BRCA2, that are linked to a higher risk of breast and ovarian cancer, and which were patented by the company Myriad Genetics more than 10 years ago. Now, the ACLU has organized a lawsuit backed by organizations representing more than 100,000 doctors and geneticists, and will argue that the information contained in each person's DNA should not be private property. The plantiffs also include individual cancer patients like Genae Girard, who was diagnosed with breast cancer, and took Myriad's genetic test

to see if her genes also put her at increased risk for ovarian cancer, which might require the removal of her ovaries. The test came back positive, so she wanted a second opinion from another test. But there can be no second opinion [The New York Times].

Since Myriad owns the patent to both the two genes and the test that looks for them, no other company can develop a competing test.

The decision to allow gene patents was controversial from the start; patents are normally not granted for products of nature or laws of nature. The companies successfully argued that they had done something that made the genes more than nature’s work: they had isolated and purified the DNA, and thus had patented something they had created — even though it corresponded to the sequence of an actual gene [The New York Times].

Patents are awarded to reward companies for the time and money spent developing a new product or idea, but in this case the plantiffs argue that Myriad had really just found something that already existed in nature, and hadn't created anything new. They also allege that Myriad's patent has held back medical research, and has prevented cancer patients from getting the best possible care.

A striking 20 percent of all human genes have been patented. However, now that all 20,000 to 25,000 human genes have been mapped and sequenced through the Human Genome Project, they are in the public domain, meaning they would no longer be considered "new" for the purposes of patents.... Now, patents on human genes must specify a new use, such as a diagnostic test [CNN].

The patents on genes also expire after 20 years, meaning that existing patents on human genes will gradually run out.

Some ethicists do not take issue with Myriad's patents but with how the company uses them. Part of the ALCU's argument is that Myriad charges $3,000 for its diagnostic cancer test, a price that prevents some women from seeking this preventive measure. "I think we're talking about unreasonable profit and exploitation of people at risk," said [bioethicist] M. Sara Rosenthal.... "The issue is greed, which is never ethical" [CNN].

More From Discover
Health
Are European Sunscreens Better Than Those in the U.S.?
Health
Why Scientists Have Been Creating Chimeras in the Lab for Decades
Health
This Rare Genetic Condition Leads to Cancer After Cancer
The Sciences
How Hollywood Movies and TV Shows Impact Real Science
The Sciences
Neanderthals Live on in Our DNA — and Perhaps Other Ancient Humans Do, Too
Planet Earth
Could Neanderthals Talk? Breakthrough Study Suggests Our Ancient Cousins Had the Linguistic Capacity for Speech
Recommendations From Our Store
My Science ShopCosmos: Possible Worlds
My Science ShopStrange Science
My Science ShopEinstein's Universe
My Science ShopElements Flashcards
Shop Now
Stay Curious
Join
Our List