Tropical parasitic diseases may lack the headline-grabbing power of bird flu or SARS and they may fail to grab the pharmaceutical industry's attention. But there is no doubt that they are a massive problem. Schistosomiasis, a disease that many people in Western countries will never have heard of, currently afflicts 3% of the world's population, a staggering 20 million people, and almost four times that number are at risk. 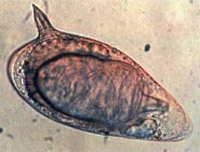 Schistosomiasis, also known as bilharzia, affects people living across the tropics. It's caused by parasitic flatworms called blood-flukes, belonging to the genus Schistosoma from which the illness gets its name. It claims the lives of 280,000 people a year and becomes chronic in millions more, causing long-term disability, debilitation and damage to the liver and gut.

For the moment, there is a safe and effective drug for treating schistosomiasis called Praziquantel. It has to be repeatedly administered to prevent re-infection but its mercifully cheap. But the good news stops there, for Praziquantel is the only effective drug against schistosomiasis and has been so since the 1980s. That's a dangerous and untenable position to be in and already, worrying reports have started to emerge about strains of blood-flukes that are resistant to the drug.

The race is on to find new weaknesses in the blood-flukes' defences, and new chemicals that will exploit these. Now, a promising new front-runner has emerged - a compound called furozan that blocks a protein that the parasite needs to protect itself while in its hosts.

Like most parasites, blood-flukes have an incredibly complicated life-cycle that involves snails as well as humans. Humans enter the cycle by wading in fresh water infested by infected snails, and drawing the attention of the parasites' free-swimming incarnations, called cercariae. These bore through the victims' skin and tour the body via the bloodstream, taking in first the lungs and later the liver, where they mature into adults. These move to the bowel or bladder and lay eggs, which are carried away in the hosts' urine and faeces. If these land in water, the eggs hatch, the parasites find more snails and the cycle is rejoined. 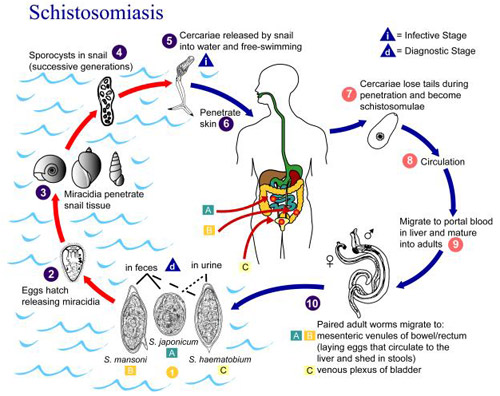 The parasite can remain in the human bloodstream for decades, shrugging off any assaults from the immune system. This invulnerability largely stems from their ability to shrug off the effects of 'reactive oxygen species", oxygen-based molecules that can wreak havoc on the parasites' cells if left unchecked, damaging its DNA and inactivating its proteins.

The flukes have a double- act of proteins designed to deal with these problematic molecules, but both of them rely on a master protein called thioredoxin-glutathione reductase, or TGR for short. The parasite needs TGR to survive and that provided Ahmed Sayed with a weakness to exploit.

Sayed, together with David Williams from the University of Illinois, used a powerful technique called 'quantitative high-throughput screening' to quickly scan a massive library of over 71,000 compounds at a range of concentrations, for those that have the ability to disrupt TGR. The most successful candidate is commonly known as furozan. It belongs to a group of chemicals called oxadiazoles and Sayed found that it irreversibly blocked the action of TGR.

In laboratory cultures, furozan managed to kill three species of blood-fluke at every stage of their life cycle, from the skin-burrowing cercariae to the liver-dwelling juveniles to the full adults. Animal tests were just as successful - compared to untreated mice, those that were given furozan had 99% fewer parasites in their skin, 89% fewer in their liver and 94% fewer egg-laying adults. Even though the eradication wasn't complete, the worms that survived were much smaller.

Furozan's performance is extraordinary. At the very least, it equals the performance of the existing drug, Praziquental, and it completely surpasses the benchmarks set by the World Health Organisation for new anti-schistosomiasis drugs. It has a complete fatality rate for blood-flukes at about a third of the concentration recommended by the WHO.

It seems to be most effective at the early stage of infections, so it could even be used as a preventive measure to stop the skin-burrowing cercariae from establishing a foothold. And most importantly, it doesn't block the effects of the Praziquantel and a double-whammy of two effective drugs would greatly diminish the parasites' chances of evolving dual-resistances.

Obviously, there's still a lot of work to be done before furozan can be deployed in the field, not least of which are clinical trials in humans. Nonetheless, Sayed is optimistic and buoyed by the lack of negative side effects in the mice.

This research was the first to be funded by the Molecular Libraries Initiative funded by the National Institutes of Health. The programme provides scientists with access to the technology and the large chemical libraries needed to find new drugs quickly, and was designed to address the shocking lack of funding for research into drugs aimed at treating neglected tropical diseases.