Some universities are using spit tests to screen students for coronavirus. But a wider roll out could transform the diagnosis of COVID-19. 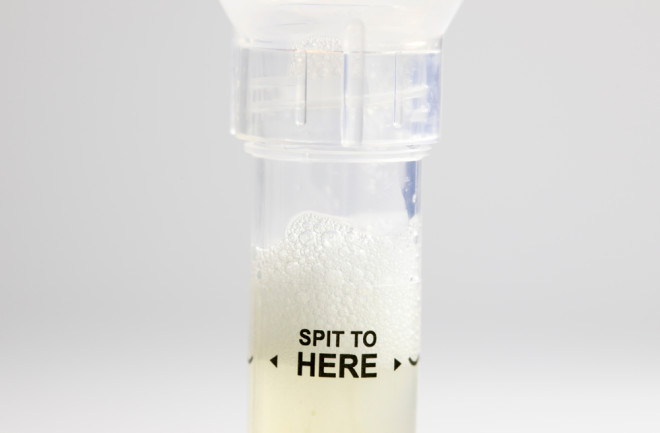 What would you rather do? Tilt your head back at just the right angle and hold still so a medical practitioner can probe the absolute depths of your nose, or spit in a tube?

The latter, of course. Filling a vial with saliva is also faster and requires less contact with other people, which is why labs around the world are investigating COVID-19 diagnostic tests that trade swabs for spit.

Some versions, like those produced at University of Colorado Boulder and the University of Illinois at Urbana-Champaign, are for students returning to campus. Others, like a rendition from Rutgers University and Yale University, have already received FDA approval. All of them need more research, and if they turn out to be decent diagnostic choices, it will be important to make sure they can be replicated reliably by other labs, says Deborah Williamson, the director of microbiology at the Royal Melbourne Hospital in Australia. Still, the tests hold promise — “anything we can do to increase the reach of testing is anything we absolutely should be doing."

As glib as the comparison between swab and spit tests sound, the ease of saliva tests actually does drive these investigations. Eliminating the amount of contact between healthcare professionals and potentially infected individuals is always helpful. Plus, “while it may seem like patients should be able to swab themselves, there's just too much room for error,” says Ian White, a molecular sensor bioengineer at the University of Maryland. Spitting into a tube is harder to mess up.

Additionally, a bunch of people can spit saliva into their respective containers at once. Swabbing requires people to wait their turn for a one-on-one moment with the administrator. Self-sampling could speed up this part of the testing process — something that could be particularly handy when large groups of people need to be tested at once, such as when a cruise ship docks, Williamson says.

For this test to be an option, someone sick with COVID-19 has to have enough of the virus in their spit to begin with. When the pandemic started, researchers didn’t know if this would be the case. Instead, they were confident the virus would show up deep in someone’s nose, Williamson says. Cells in that patch of your throat get infected by other respiratory viruses, and prodding them with a swab would likely pick up the pathogen. Further investigations revealed that salivary gland cells have receptors that SARS-CoV-2 binds to. “It would not be a quantum leap to think you’d find reasonable levels in saliva,” Williamson says. Research continues to indicate that there are testable levels of the virus floating in the spit of an infected person.

After someone spits in a tube, the next hurdle appears: Does the virus stick around long enough to show up in an analysis? It’s possible other components of our saliva break down the viral genetic information, White says. If those agents move fast enough, there won’t be enough SARS-CoV-2 around to detect by the time the sample hits processing machinery. This is an issue with nasal swab tests, too. One testing company states that swabs kept at room temperature or in the fridge can last five days, while those in freezers can last longer. Some swabs get dunked in a fluid that keeps viral genetic material together.

Initial research indicates that SARS-CoV-2 might linger in spit. Some of that work is still preliminary, however, like test proposed by the group at Yale University, which has yet to be reviewed by other scientists. It might turn out that researchers have to treat saliva like nose swabs and add stabilizers or keep it cold, White says. How much virus is present in saliva by the time it goes to the lab can affect how good the test is at detecting positive cases. Initial, unreviewed published reports indicate some spit tests are comparable to nose swabs when it comes to correctly identifying who does and doesn’t have COVID-19. Even if these tests are perpetually less on-the-nose than swab versions, they can still be useful in settings where lots of frequent testing is essential, Williamson says.

If saliva tests clear these barriers, they might also introduce other techniques to improve COVID-19 diagnostics. Right now, the typical testing protocol involves a series of chemical treatments that work to isolate a virus's genetic information. Then, like a miner panning for gold, technicians wash away those additives. Only then can labs run the sample through a machine that, if the virus is present, makes millions of copies of it — making for easier detection of whether or not it was in the swab in the first place.

This process is notoriously slow and expensive. Also, the more ingredients involved, the more likely it is that the supply chain will falter, White says. Running out of one specific component can temporarily stop a lab from processing COVID-19 tests. Back in March, facilities ran so low on specific kits that extract SARS-CoV-2 genetic information, scientists turned to social media to plead for other labs to send their extra kits their way.

Some saliva tests are looking to dodge these costs and frustrations. The option out of Yale University ditches the extraction kits in favor of heating up the sample and throwing in a more generic, easily accessible additive. The choice, they say, brings down testing costs and reduces the number of ingredients susceptible to supply issues. Others, like the University of Colorado Boulder test, introduced simpler, less expensive tools to replicate the SARS-CoV-2 genetic information.

If spit tests do become more common, they will need to be deployed in areas where swabs are in short supply, Williamson says. And even if they aren’t perfect, some of the strategies the new tests introduce — like bypassing expensive or rare additives — could have lasting effects. In normal times, diagnostic technology advances slowly. New adoptions only happen if the suggested change makes a huge difference. “Academics (like me and many others) have investigated methods to reduce or eliminate these steps,” White says, “but clinical labs haven't seen sufficient benefit — until now.”