Neutralising anthrax by gumming up a molecular lock

In the final months of 2001, five people died because they opened their mail. The killers were hidden inside the envelopes, small spores that were inhaled by the unfortunate addresses. Inside their bodies, the spores turned into the deadly bacteria, Bacillus anthracis - anthrax. 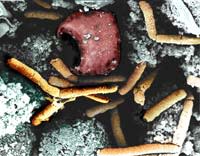 Anthrax has a long history in biological warfare but it made its debut as an agent of bioterror in 2001. The US anthrax postal attacks infected 22 people and claimed the lives of five. Since then, scientists have been feverishly studying the bacteria responsible in the hope that better understanding will lead to effective treatments. Two years ago, one group managed to develop a potential new treatment that neutralises anthrax toxins by acting on the host's own cells rather than the bacteria itself.

We now know that a the anthrax bacterium uses a protein called PA as the literal key to its infiltration of mammalian cells. PA fits into molecular locks on host cells, known as anthrax receptor 1 and 2 (ANTXR1 and ANTXR2). When this happens, PA is unwittingly taken into the host cell where it creates its own doorway in the cell's membrane. This secret passage allows the virus to smuggle in more dangerous and toxic agents like the sinisterly named lethal factor (LF).

Several researchers have tried to develop anti-anthrax measures by destroying or blocking the key protein, PA, but these solutions face a large problem. Bacteria already have a good track record for developing resistance to treatments and since anthrax is a potential biological weapon, it may well be intentionally re-engineered to fool any counter-measures used to stop it.

We need a different line of defence, and Saleem Basha and Prakash Rai at the Rensselaer Polytechnic Institute, New York, have found one - if you can't destroy the key, stick gum in the lock.

To find a suitable piece of gum, the duo started off with a random collection of peptides - short chunks of protein. They exposed this collection to ANTXR1 and 2, in the hope that some of them would have the right shape to latch onto these locks. Any peptides that didn't fit were washed away. Basha and Raj repeated this process several times so that only those peptides that stuck very strongly to the anthrax receptors remained.

Once they had homed in on their star peptide, they decided to go for strength in numbers. They attached multiple copies of the peptide of choice to a molecular scaffold, allowing it to gang up on any threatening virus. In laboratory tests, these scaffolds increased the peptide's efficiency by over 50,000 times.

Having proved its worth in the lab, the researchers gave their anti-anthrax peptide a field test. They injected six rats that with anthrax toxin and their peptide scaffold and amazingly, all six showed no signs of infection or ill health. By sticking to ANTXR1 and 2, the peptide prevented PA from getting a foothold, leaving it knocking on the door in vain. It completely neutralised the anthrax toxins.

Currently, antibiotics do nothing for anthrax patients once symptoms have developed. They can rid people of the bacteria but do nothing to stop the toxins already in the body from wreaking further havoc. The peptide on the other hand can do that, and could provide the breakthrough needed to effectively treat patients.

Basha and Raj's method also has many applications for designing ways of fighting other diseases. Bacteria often acquire resistance to treatments and antibiotics, leading to new threats like drug-resistant tuberculosis, and the infamous MRSA bug. But Basha and Raj's fast and inexpensive technique overcomes the problem of resistance, by ignoring the threat itself and instead cutting off its point of attack.