A polymorphism of the ability to smell urinary metabolites of asparagus.

"The urinary excretion of (an) odorous substance(s) after eating asparagus is not an inborn error of metabolism as has been supposed. The detection of the odour constitutes a specific smell hypersensitivity. Those who could smell the odour in their own urine could all smell it in the urine of anyone who had eaten asparagus, whether or not that person was able to smell it himself. Thresholds for detecting the odour appeared to be bimodal in distribution, with 10% of 307 subjects tested able to smell it at high dilutions, suggesting a genetically determined specific hypersensitivity." 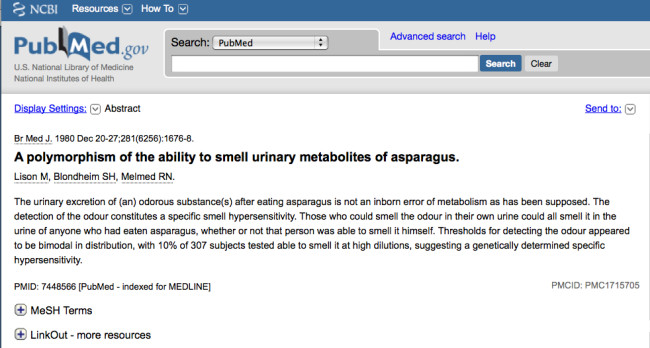 Face it: your pee smells after you eat asparagus. (And if you think yours doesn't, it's because you can't smell it.) This phenomenon (which is caused by various malodorous sulfur-containing compounds) has tickled the fancies of many researchers, as well as such luminaries as Proust, who wrote of asparagus: "exquisite creatures who had been pleased to assume vegetable form, and whose precious essence when, all night long after a dinner at which I had partaken of them, they played (lyrical and coarse in their jesting like a fairy-play by Shakespeare) at transforming my chamber pot into a vase of aromatic perfume (translated from Du côté de chez Swann, Gallimard, 1988, I, 119; I, 131). But our favorite allusion to the asparagus-pee phenomenon has to be from Benjamin Franklin, who, in 1871 1781, wrote a letter asking researchers to come up with a solution to fart smells (the letter is definitely worth reading in full: To the Royal Academy of Farting): "Certain it is also that we have the Power of changing by slight Means the Smell of another Discharge, that of our Water. A few Stems of Asparagus eaten, shall give our Urine a disagreable Odour; and a Pill of Turpentine no bigger than a Pea, shall bestow on it the pleasing Smell of Violets. And why should it be thought more impossible in Nature, to find Means of making a Perfume of our Wind than of our Water?" So, now that we understand why our pee stinks when we eat asparagus, can we address Benjamin's larger concern? Check back tomorrow for some cutting-edge research on fart-smell-reduction!